#NeoEBM My blog posts are automatically tweeted. A group of twitterers got together at PAS and suggested that this hashtag should become a marker of neonatal Evidence Based Medicine posts. Great initiative! Now I have to find out how to do this…

Peter Davis was, as usual, omnipresent in the neonatal clinical research arena of PAS. You wouldn’t know that from the App but try searching for him on the website and you will find 15 abstracts on which he was an author. Interestingly though, you won’t find the MIST/LISA workshop that Ahmed Moussa from our hospital organized, and which is the only hit on the mobile App.

As I have for all of these posts, I have had to use both the website and the mobile App to write this one.

One of these abstracts trials is a modestly (but adequately) sized randomized trial of using hydrocolloid dressings to protect the noses of babies on CPAP who were less than 1250g birth weight or less than 30 weeks. Just over 100 babies were enrolled, and the incidence of nasal injury was substantially lower using the dressing (34%) than not (56%).

You can’t see the remainder of the results on the website as they are in tables that are invisible. But on the mobile App you can see that the demographics of the 2 groups were similar and other outcomes such as BPD and duration of CPAP were the same.

This is how the dressing was cut and applied with the use of Hudson Prongs.

The illustrations are also not visible on the website, and you have to download them to see them on your phone, but then if you are very clever you can email them to yourself, and insert into a blog post! Many of the babies had their noses photographed in order to have an independent evaluation of the cuteness of the noses, or maybe it was to examine the nasal injury. 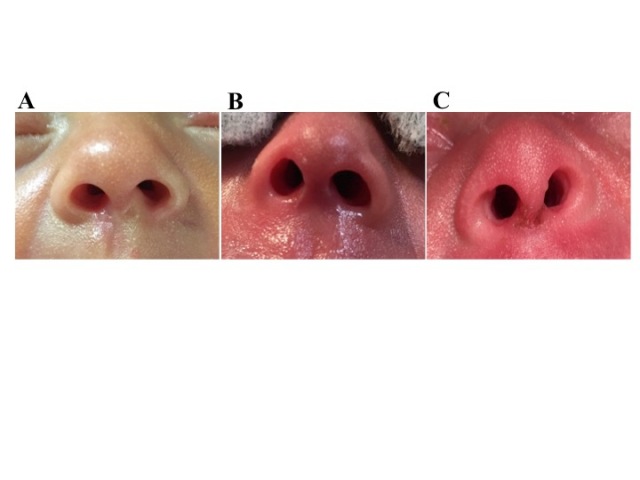 The big problem with this trial is the acronym, which is not as imaginative as we expect from Melbourne. PRONOSE is easy to remember, and tells you what the trial was about, but is that really what we want from an acronym?

I am a neonatologist and clinical researcher at Sainte Justine University Health Center in Montréal
View all posts by Keith Barrington →
This entry was posted in Neonatal Research and tagged CPAP, Randomized Controlled Trials. Bookmark the permalink.