Not neonatology: the antipodes week 3. Tongariro Crossing: Sweet As!

Posted on 1 January 2015 by Keith Barrington

We ended week 2 and had a warm Christmas in Rorotua, then moved on to Tongariro national park. The plan was to cross the Tongariro Alpine Crossing, which we have long time thought would be one of the highlights of our trip. We were not disappointed.

A 20 kilometre, all day, hike with 3 children aged 7, 9 and 11 needed some planning. Fortunately Annie had organized a guide, who was able to time our movements with the weather so we saw great views of the craters and lakes (as well as teaching us some kiwi slang, see the title of this post). Walking across the Southern Crater was like crossing a Martian landscape (or at least what we see from the Martian Rover photos, not having actually visited myself).

Then a climb up to the Red Crater, where we stopped for lunch (#1).

A further climb to our highest point of the day just above the Emerald Lakes and the Blue Lake, and lunch number 2. 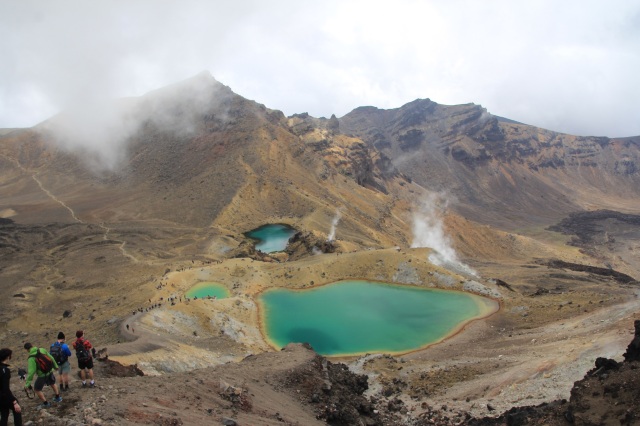 After which the walk was mostly downhill, from 10 km onwards, which was great for the kids, they were still running by the end of the day. As we passed close to the site of the 2012 eruption, a steam vent started to pour out steam as you can see on the ridge in this next photo. The steaming earth lower down was hot to the touch, which was not something I had ever experienced before.

There was a big eruption here only 2 years ago, in August 2012. A rock crashed through the roof of one of the huts which used to be available for overnight stays if you were doing one of the multi-day walks in the region. So it is no longer used. The clouds of gas and dust had killed most of the plan-life in this last part of the track, which is starting to regenerate

The crossing was very busy, it has become known as one of the 10 great walks in the world, so there were hundreds of people doing the walk; probably more than there would have been becauses the next 2 days weather forecast was for rain.

Probably part of the attraction is that Mount Ngauruhoe, the peak with the typical volcano shape, was used as Mout Doom in the Lord of the Rings movies. Apparently the Mountain is sacred to the Maori (as is much of the land, especially the mountains) so the shape was digitally altered for the movie. Here is an un-altered view:

I haven’t done any of the other 10 best walks, but the spectacular, varied scenery on this crossing were certainly worth the climb.

1 Response to Not neonatology: the antipodes week 3. Tongariro Crossing: Sweet As!