The jaundiced eye of the beholder

Posted on 3 February 2020 by Keith Barrington

Well, this is disappointing, the amazing results from Iowa regarding the outcomes of infants born at 22 and at 23 weeks gestation have now been published in the February print edition of the Journal of Pediatrics. What is disappointing about it is the editorial comment from Dr deRegnier (deRegnier R-A. The eye of the beholder: Periviable outcomes in Iowa. The Journal of Pediatrics. 2020;217:1-3). In it, she suggests that “The reported outcomes will be interpreted as good or bad through the eye of the beholder”.

I don’t know what kind of beholder would see the survival of babies as a bad thing, even if the survival means that some of them might have cerebral palsy or developmental delay. (Watkins PL, et al. Outcomes at 18 to 22 Months of Corrected Age for Infants Born at 22 to 25 Weeks of Gestation in a Center Practicing Active Management. J Pediatr. 2019).

This is a group of babies, previously left to die and thus with a 100% mortality rate, who, the group in Iowa has shown us, can be rescued by high quality perinatal and neonatal care with the survival of 14 of 20 infants born at 22 weeks (14/24 if non-resuscitated babies and those not surviving initial resuscitation are included) and 41/50 at 23 weeks (14/52). Among the survivors evaluated, 11% had “severe NDI” which seems to have been almost entirely due to a Bayley-3 cognitive score less than 70.

The majority of survivors had no problems or minor problems. If there is an eye that beholds that as being a bad thing, then maybe the eye should be “plucked out” (sorry for the Christian reference; I am an atheist but with a Christian/protestant heritage).

Any reasonable human eye would surely behold a 60 to 70% survival, with encouraging long term outcomes, as a good thing. Other networks are also seeing progressive improvements in the survival of infants born at 23 weeks or less (the Canadian Neonatal Network for example) look at the figure below (from the 2018 annual report) for the survival among actively treated infants at 23 weeks and <23 weeks. Only 30% of babies under 23 weeks received active treatment, and there wasn’t much change in that over these years, but among babies born at 23 weeks the proportion receiving active treatment increased from about 60% to 70-80% over this period. 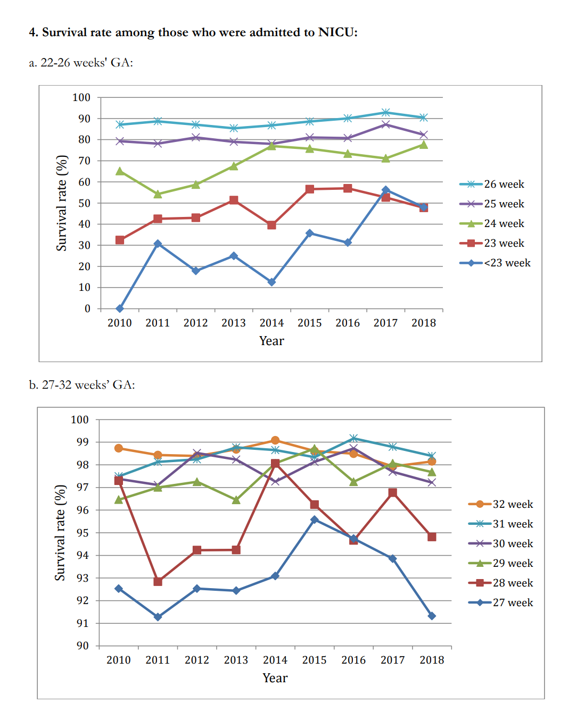 One day we hope to replicate the amazing success in Iowa, which I think only a very jaundiced eye could think was not a major advance in neonatology.

I am a neonatologist and clinical researcher at Sainte Justine University Health Center in Montréal
View all posts by Keith Barrington →
This entry was posted in Neonatal Research and tagged mortality. Bookmark the permalink.

3 Responses to The jaundiced eye of the beholder