Giving bad news as it happens

Posted on 30 January 2020 by Keith Barrington

We have already published about what residents think about being part of a resuscitation simulation that fails. What we showed was that residents appreciated a resuscitation scenario where the baby dies despite them doing the right thing. (Lizotte M-H, et al. Trainee Perspectives on Manikin Death During Mock Codes. Pediatrics. 2015;136(1):e93-e8). What I mean by that is that one problem with resuscitation simulations is that usually, (for pedagogical purposes) if the trainee follows correct procedures, the patient recovers. In real life (IRL as the younguns say), you can do everything right, but the baby dies anyway. How do we teach residents the best way to convey the worst news possible while it is actually happening? And what is the best way anyway? In that previous study, residents noted that a simulated resuscitation that included simulated discussions with parents would be a good idea.

The idea behind the study was this: IRL sometimes babies die despite competent resuscitation. When that happens, it is usually without any preparation, and everyone is traumatized, the resus team and the obstetric team, but especially the parents. Can we describe, and then teach, the best behaviour in the worst of circumstances?

Our team decided to include bereaved parents, and not just medical ‘experts’, which was a very risky undertaking. Asking parents who had lost a child to evaluate the behaviour of medical trainees during the simulated death of a newborn had all sorts of potential problems; again we are ‘lucky’ to have Annie Janvier as part of the team; she has created links with many parents, including those who have lost a baby, and encouraged them to be part of our team improving quality in neonatal resuscitation. We had several levels of screening before finally collaborating with 6 bereaved parents in this study.

We were very careful to inform parents what they were getting into, to give them examples of what they might face, and then show them sample, fake, videos. At each stage, there were parents who didn’t feel able to continue, but finally, we were very fortunate to have several parents who wanted to help us teach residents how to give the worst possible news to parents.

In our simulation centre, we had 31 clinicians, who have to do neonatal resuscitation as part of their work, perform an extensive resuscitation where the manikin was programmed not to respond. Simulated parents were present and the resuscitation and the interaction with the parents was videoed and evaluated.

Where you can watch Annie do her bit, and Ahmed join in speaking really quickly to be under the time limit.

We analyzed the interactions with the actor parents before, during and after the resuscitation, and then asked all the evaluators who they thought were the best communicators. The evaluators included a clinical psychologist, nurses, an NNP, an obstetrician and a few neonatal providers in addition to the parents and the 2 actors.

The scores given by the parents were routinely a bit lower than the providers, and the actors scored most people higher. There was a lot of agreement about who were the best communicators; we then analyzed the details of how they interacted with the parents to identify simple teachable skills that were associated with being a good communicator. Many of those skills were overtly identified by evaluators as being positive.

These are what we identified as positive behaviours and examples of things to say to the parents. 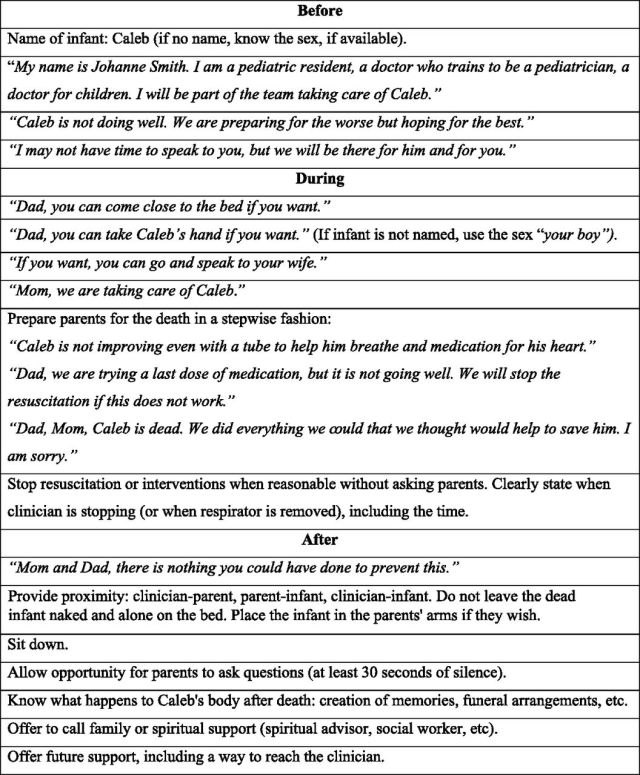 Interestingly many of the residents did not know the details of what happens to the body after death, some were juniors who had never really been involved in a death yet during their training; others had, but often still didn’t really know what the procedures were. The nurses all knew in detail.

Many of these behaviours are simple to learn and remember, some of them you probably already do, if you are involved in looking after critically ill children. But on a busy night on call, when you need to get back to the NICU for your other patients, and you are already tired and a bit frazzled, we can all forget things which in our best moments would be natural. I’ve been involved in many baby deaths. Most parents only experience it once. Being compassionate, supportive and caring are essential, and most of us in the field are there because we have those characteristics in our natures. Following these simple suggestions will help parents to feel cared for at the worst time in their lives.

I am a neonatologist and clinical researcher at Sainte Justine University Health Center in Montréal
View all posts by Keith Barrington →
This entry was posted in Neonatal Research and tagged Ethics, families, mortality. Bookmark the permalink.