Posted on 23 December 2016 by Keith Barrington

We had a journal club for the fellows lately, everyone had to find an article about venous thrombosis and association with central catheters. We chose the topic because seem to have many more thromboses than in the past, whether that is due to an increasing sensitivity of routine ultrasound, or if the incidence is truly increasing. I don’t know if there has been some change in practice or in catheter materials or in the relative size of the catheters now that we use mostly multi-lumen catheters, but we certainly have a lot more babies for whom we consider anticoagulation, and sometimes do it.  This certainly was not a systematic review, but an attempt to get an overview of incidence and risk factors, of what are the consequences at short and long-term, and whether anyone knows what are the indications for treatment and whether treatment should be anticoagulation (and if so with what) or thrombolysis, and whether treatment makes a difference in the long term.

This is chronologically the first of the studies, the authors prospectively enrolled 100 babies with umbilical catheters, and then repeatedly ultrasounded them during and after catheter removal, specifically being interested in Portal Venous thrombosis, and then repeatedly until the clots resolved or the baby was discharged. They found 43% of them had thromboses, which were more likely if the catheter was in place for more than 6 days, and if it had been used for a transfusion. It looks like the presence of the catheter in the portal vein increases the risk (up to 62%). They divided the clots into occlusive and non-occlusive; the occlusive ones were less likely to resolve, 69% of them were still present at discharge. They didn’t treat with anticoagulants, and 70% of the non-occlusive clots resolved. Position of the catheter tip was not statistically significantly associated with thrombosis, but 63% of catheters which had been in the portal vein developed thrombosis, the lack of significance may just be an issue of power. Catheter duration over 6 days was also a risk factor.

This study was a secondary publication from an RCT of umbilical catheter duration, infants were prospectively evaluated with ultrasound for central catheter related thromboses. 11% of the approximately 200 infants developed a UVC-related thrombosis, a high hematocrit (over 55%) was the only factor, on adjusted multivariate analysis, associated with increased risk. In the original trial (comparing use of UVCs for 7 to 10 days followed by a picc, to use of UVCs for up to 28 days) there were 13% with thrombi in the long-term group, and 9% in the short-term, none were occlusive.

This is a retrospective cohort study of children admitted to the Toronto sick kids’ hospital NICU who had a diagnosis of portal vein thrombosis. They had 133 infants over 4 years, 73% of their infants had a UVC, and the majority of those who developed a thrombosis had a low or intrahepatic catheter position. Many of their patients progressed to lobar hepatic atrophy or portal hypertension (26% and 3% respectively). They also present a grading system, infants with more severe grades were more likely to develop those complications, and infants with mal-positioned UVCs were also more likely to develop complications. Many of their diagnosis were made when an abdominal ultrasound was performed for non-specific indications (babies with malformations or evaluation of hypertension) thrombocytopenia was relatively common at the time of the diagnosis. The authors could not find any indication that anticoagulation, which was given to about half of the babies, changed the outcome. They anticoagulated babies with a second thrombus, who had cardiac surgery, or who had a grade 3 thrombus.

This is their image showing the grading system.

Shah PS, et al. A randomized, controlled trial of heparin versus placebo infusion to prolong the usability of peripherally placed percutaneous central venous catheters (PCVCs) in neonates: the HIP (Heparin Infusion for PCVC) study. Pediatrics. 2007;119(1):e284-91. This one is a little different, an RCT of heparin in picc lines, which showed that heparin prevents thrombosis of the catheter itself, but there is no evidence that it changes the rate of catheter associated central vein thrombosis (which occurred in 18% in each group, and were all non-occlusive). Which is very similar to the data from umbilical arterial catheters Barrington KJ. Umbilical artery catheters in the newborn: effects of heparin. Cochrane database of systematic reviews (Online). 2000(2):CD000507 heparin in UACs prolonged catheter patency, but did not affect arterial thrombosis rates. I also found one small trial of heparin for umbilical venous catheters (Unal S, et al. Heparin Infusion to Prevent Umbilical Venous Catheter Related Thrombosis in Neonates. Thrombosis Research. 2012;130(5):725-8.) there were only 19 babies in the heparin group (and 27 controls) with one control baby developing a thrombosis. Clearly not significant statistically, but woefully underpowered.

Park CK, et al. Neonatal central venous catheter thrombosis: diagnosis, management and outcome. Blood Coagul Fibrinolysis. 2014;25(2):97-106. This is a literature review, giving an overview of the topic and trying to synthesize the information from the mostly observational studies, many of which report different outcomes, and had different methodologies for detecting thrombi. They couldn’t find any reliable evidence that anticoagulation improves outcomes after a catheter associated thrombosis, they describe one study which reported the use of urokinase for catheter associated central venous thrombosis, about half of the clots resolved with this intervention but there were no controls.

Bohnhoff JC, et al. Treatment and follow-up of venous thrombosis in the neonatal intensive care unit: a retrospective study. J Perinatol. 2016. In this retrospective study the authors treated about 2/3 of the 26 central venous thromboses with low molecular weight heparin, the others had contra-indications to therapy. Doses needed were higher than the current recommendations especially for the preterm babies, some of the thromboses resolved, some of the babies were still treated after discharge. There were no hemorrhagic complications. There really isn’t any evidence from this study that the enoxaparin made a difference.

Saracco P, et al. Clinical Data of Neonatal Systemic Thrombosis. The Journal of pediatrics. 2016;171:60-6 e1. This is a report from an Italian registry, and includes 75 babies with systemic thrombosis, including arterial, venous and intracardiac thromboses. It really wasn’t very helpful for answering any of our clinical questions.

Finally, this article wasn’t discussed in our journal club, but it reports long-term outcomes from the sick kids cohort of portal vein thromboses (PVT). Morag I, et al. Childhood outcomes of neonates diagnosed with portal vein thrombosis. Journal of Paediatrics and Child Health. 2011;47(6):356-60. They found outcome data for 70 babies, and the duration of follow up was 2 to 8 years (LLA is hepatic left lobe atrophy). They conclude

…28% still had asymptomatic LLA in childhood, 7% had slowly progressive splenomegaly and 3% required shunting because of progression of portal hypertension. Ultrasonographic follow up was the most sensitive method in detecting progression associated with neonatal PVT. Until more data are available, periodic long-term ultrasonographic follow up should be considered for neonates diagnosed with PVT.

So what does this all mean? It is clear that central venous catheters can lead to central vein thrombosis, the major risk factors appear to be malposition of an umbilical venous catheter in the portal vein branch, and probably polycythaemia. Some children develop long-term complications of a thrombosis, with as many as 2 to 3% perhaps having portal hypertension, if the progressive splenomegaly is a sign of incipient portal hypertension then the incidence may be much higher. The anatomy of the region is complicated, and in fact looking for an image on google, representations of the anatomy are often wrong. This is a diagrammatic representation which I found here. 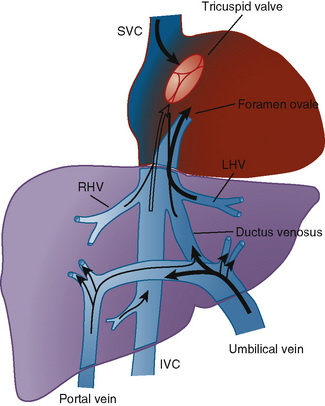 Malpositioned umbilical venous catheters therefore often pass into the left branch of the portal vein, which may then become thrombosed decreasing perfusion of the left lobe of the liver. I am not sure why low catheters should have a higher risk of thrombosis than catheters in the ductus venosus or IVC, but that does seem to be the case in some studies, but not consistently. One idea for that association is that low catheters are often low because they won’t advance properly, and may have entered the portal vein during attempted insertion leading to endothelial damage and initiating thrombosis. It would be interesting to see if catheters intentionally inserted low (such as for resuscitation) also have an increased risk of thrombosis. Umbilical catheters left in place for more than 6 days also are more frequently associated with thrombosis, that agrees with the data from the RCT of UVC duration that I cited, where thrombosis recognition was after 5 days.

It isn’t clear to me that anticoagulation makes any difference, and I think that non-occlusive thrombi can probably be watched without therapy.In fact there is no good evidence that either heparin or LMWH improve outcomes for any site of thrombosis in the newborn as a very recent Cochrane review makes clear.

Occlusive and especially grade 3 thrombi have a higher risk of long-term adverse effects, but whether heparin, low molecular weight heparin (LMWH), or thrombolysis make any difference is not clear; LMWH can usually be given relatively safely, requires less monitoring as dose requirements are more predictable, and can be given intermittently. Thrombolysis always makes me anxious, I think it should be reserved for the most problematic thrombi, such as intracardiac cases.

So here are a few propositions, some are obvious some are speculative:

I just searched clinicaltrials.gov and there doesn’t seem to be any relevant controlled trials of heparin or LMWH in the newborn. Off-label use of the LMWHs is quite frequent, so an RCT or 2 would be feasible within a research network.

I am a neonatologist and clinical researcher at Sainte Justine University Health Center in Montréal
View all posts by Keith Barrington →
This entry was posted in Neonatal Research and tagged long term outcomes, Thrombosis. Bookmark the permalink.