How frequent is Acute Kidney Injury in the NICU? Not as frequent as some publications would have you believe.

Posted on 25 January 2016 by keithbarrington

The increase in serum creatinine has been described for several years, (Miall LS, et al. Plasma creatinine rises dramatically in the first 48 hours of life in preterm infants. Pediatrics. 1999;104(6):e76.) the mechanisms have been investigated (they include creatinine re-absorption from the tubules) and the usual profile of creatinine clearly described. This is what normal creatinine values in very preterm babies look like, according to (Thayyil S, et al. A gestation- and postnatal age-based reference chart for assessing renal function in extremely premature infants. J Perinatol. 2008;28(3):226-9).
. 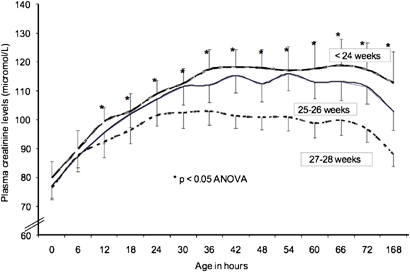 As you can see, on average plasma creatinine increases by about 40 micromol/L in the first 48 hours of life, which means, according to the definitions used in several recent articles, on average all very preterm babies have AKI!

The day to day changes were plotted like this (in the same publication).

So you can’t use a definition based on creatinine alone to diagnose AKI in very immature infants. According to one recent publication, 100% of babies at 22 and 23 weeks gestation had AKI, and 80% of 24 week infants. Most of those babies have good urine output, follow the usual postnatal weight loss trajectory, do not become hyperkalemic, in short they have no sign of renal dysfunction.

By day 2 to 3 tubular creatinine reabsorption is ending, and the creatinine starts to fall, after that you might be able to diagnose AKI from changes in the creatinine concentration alone, but it would be great to have some definition of AKI in the preterm that actually reflected renal injury and which was correlated with later renal problems, without that, it is hard to know what to do about a creatinine increase. Certainly creatinine increases in the first 2 days of life are almost universal under 28 weeks and do not mean Kidney Injury. Some years ago it was suggested that an increase in creatinine over 0.5 mg/dl, or 44 micromol/L could be used in the first 3 days, these graphs show that would be a more appropriate threshold, at least from a statistical point of view, if such a threshold is a good discriminator between those babies with and without true AKI needs to be investigated.

8 Responses to How frequent is Acute Kidney Injury in the NICU? Not as frequent as some publications would have you believe.