How much should we feed babies?

Posted on 19 August 2020 by Keith Barrington

Surely after 60 years of neonatal intensive care, we have figured out what volume of milk to give to small preterm babies? Our local feeding protocol uses a standard of 160 mL/kg/d, which we will increase to 170 mL/kg/d if weight gain is sub-optimal and the 160 is tolerated. With our current protocol, we often have to increase the calorie density of the milk, by adding extra fortification (and go beyond what has been well studied), but maybe we should just increase the volume further. Will babies routinely tolerate 180 to 200 mL/kg/d, and is it safe?

In this new study from the group in Birmingham Alabama, (Travers CP, et al. Higher or Usual Volume Feedings in Very Preterm Infants: A Randomized Clinical Trial. J Pediatr. 2020) 224 babies of between 1000 and 2500 g birth weight were enrolled when they had reached “full-feeds” defined as 120 mL/kg/d. They then advanced their feeds at 20 to 30 mL/kg/d until they reached either 140-160 mL/kg/d or 180-200 mL/kg/d. In either group, if weight gain was considered insufficient the calorie density could be increased. It seems as though donor human milk was not used, supplemental feeds were with preterm formula.

Fluid and calorie intake were higher in the high-volume group, and weight gain (the primary outcome variable) was consequently also greater. This is the comparison of calorie intake between groups. 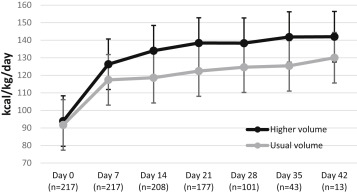 The average calorie density at study termination was 23 kcal/oz in each group (ranging from 20 to 30 kcal/oz), so they could possibly have achieved as good growth in the lower volume group by increasing calorie density. The feed tolerance was excellent in both groups and was not more of a problem in the higher volume group. There were no cases of Necrotizing Enterocolitis.

The implications for my practice are that we can safely increase feed volumes above our usual range, in babies over 1kg at least, rather than increasing calorie density with more fortifier. This will give our babies more breast milk (maternal or donor, in our unit), which always sounds like a good thing to do!

It is amazing that despite years of academic neonatology there were only 2 previous trials of similar comparisons, one from Sydney compared 150 to 200 mL/kg/d of fortified breast milk or formula in babies <30 weeks gestational age (n=57), and another from Vellore in India compared 200 to 300 mL/kg/d of unfortified breast milk in 64 babies <1500 g. There are so many important simple questions that we have not asked, much of current practice depends on approaches that gradually developed over the years and have never been adequately tested. It is time we changed that.

I am a neonatologist and clinical researcher at Sainte Justine University Health Center in Montréal
View all posts by Keith Barrington →
This entry was posted in Neonatal Research and tagged enteral feeding, Necrotising Enterocolitis, Randomized Controlled Trials. Bookmark the permalink.

4 Responses to How much should we feed babies?