Antenatal steroids : good, bad, or both?

There are now some animal models which suggest that antenatal steroids, in doses probably comparable to those given for threatened preterm labour, have measurable impacts on the fetal brain. The doses of steroids that are routinely used were guessed at from sheep studies by Liggins and Howie, and have not changed since, nor have different doses been subject to prospective trials. It is certainly a possibility that, even while reducing mortality and several neonatal complications, antenatal steroids might adversely impact cerebral development.

Hence the rationale for this study from Finland (Raikkonen K, et al. Associations Between Maternal Antenatal Corticosteroid Treatment and Mental and Behavioral Disorders in Children. JAMA. 2020;323(19):1924-33.0), using extensive population-based registries the authors analyzed the association between having a database entry which means antenatal steroid therapy (it is not stated if this might include mothers receiving steroids for other conditions, such as rheumatoid arthritis, or just antenatal steroids given for threatened preterm delivery, but it seems from their analysis that the large majority were courses of betamethasone for threatened preterm delivery) in the “Medical Birth Register” and the child having a code in the “Finnish Care Register for health care” which indicated a mental or behavioural disorder, according to ICD-10 codes. The codes were used to classify treatment episodes from “physicians in specialized care” in hospital inpatient or outpatient settings.

The authors found for the entire cohort an increase in the proportion of children with a code for a mental or behavioural disorder from 6.5% of those who were not exposed to antenatal steroids, to 12% of those who were exposed. For the primary outcome variable (which was having any of the target ICD codes recorded for a mental or behavioural disorder) this was true among infants who delivered at term, and remained true after correcting for multiple potential confounders. Preterm infants were also more likely to have such a code recorded if they had been exposed to antenatal steroids, but the impact disappeared after multivariate correction for the following factors :

The guts of the results are in this Forest plot: 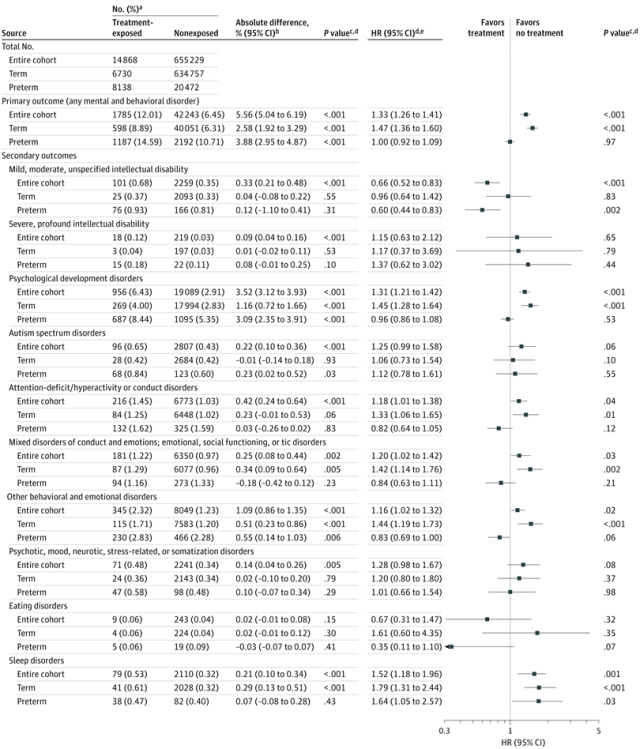 If we focus on the major contributor to the primary outcome, “psychological development disorders” we see this :

There is an increase from 2.8 to 4% of this group of codes among infants who delivered at term after exposure to antenatal steroids, which remains after the above-mentioned adjustments, and an increase from 5.4 to 8.4% among preterm delivered infants, which disappears after adjustment.

Does this mean that antenatal steroids are having significant impacts on brain development? My major concerns with this publication are the potential for confounding by indication, and the relevance of the outcome variable.

As for the outcome variable, does having a discharge code for hospital visits that are diagnostic codes for ‘mental or behavioural problems’ really mean that the infants are having difficulties? How does such a finding relate to the impacts on the daily lives of the children? Do such children have more schooling problems? Or more problems in their families?

Antenatal steroids are given because of an increase in the risk of preterm delivery. Most of the exposed fetuses who eventually deliver at term were presumably exposed to ACS because of preterm labour, pre-eclampsia, preterm rupture of membranes, chorioamnionitis, severe growth restriction or other pregnancy complications. Thus the small increase in the proportion of children with the outcome codes (small but, on a population basis, very important) may be related to the occurrence of preterm labour, often triggered by inflammatory changes. In other words, it is possible ( I would even say likely) that these data are biased by confounding by indication.

A useful control/comparison group would be those who had a similar presentation but did not receive antenatal steroids, a group which probably does not exist in sufficient numbers.

Other data already exist, not referenced by these authors, that an episode of preterm labour, followed by delivery at term, is associated with poorer neurodevelopmental outcomes. (for example Paules C, et al. Threatened preterm labor is a risk factor for impaired cognitive development in early childhood. Am J Obstet Gynecol. 2017;216(2):157 e1- e7.) Presumably in that study also, an episode of preterm labour was associated with the administration of steroids.

I think that from observational data we will never be able to answer the question of whether threatened preterm delivery, or antenatal steroids, or something else, is the factor which leads to health care encounters coded as a mental or behavioural disorder.

Antenatal steroids can be life-saving, and the lower the gestation the smaller the NNT to prevent one death. One way to answer the question about the potential adverse impacts of the intervention would be a long term outcome study among infants from the Gyamfi-Bannerman trial. In that trial, antenatal steroids prior to expected late preterm delivery reduced the number of babies needing CPAP by 20% (from about 13 to 10%).

Late preterm infants clearly have poorer developmental outcomes than babies born at term, and late preterm infants who are admitted to the NICU are worse off than those who do not need intensive care. So withholding antenatal steroids from them is something that we should consider very carefully, but if the NNT to prevent NICU admission is large, and there are potential adverse impacts on the remaining infants who do not necessarily have a benefit of the steroids then I think we could consider withholding antenatal steroids in those situations where the benefit is more questionable, in a Randomized comparison of long term outcomes. That will take a while to happen.

In the meantime, I think an analysis of observational data could be more informative if we analyzed the different subgroups of indications for antenatal steroids. If there is a consistent association of antenatal steroids with poorer outcomes among all indications, those that are associated with inflammation (PPROM and chorio for example) and those that are less inflammatory (PET and IUGR), then that would confirm that it might well be the steroids themselves, rather than the indication for steroids, that are the adverse factor.

I am a neonatologist and clinical researcher at Sainte Justine University Health Center in Montréal
View all posts by Keith Barrington →
This entry was posted in Neonatal Research and tagged antenatal steroids, long term outcomes, steroids. Bookmark the permalink.

4 Responses to Antenatal steroids : good, bad, or both?