Its now or… later? A good question to ask ELVIS.

This study probably wins the prize for the best trial name in neonatal history, the Early or Late Ventricular Intervention Study, ELVIS.

de Vries LS, et al. Treatment thresholds for intervention in posthaemorrhagic ventricular dilation: a randomised controlled trial. Archives of Disease in Childhood – Fetal and Neonatal Edition. 2018. This is a very important trial comparing 2 approaches to post-hemorrhagic ventricular dilatation in babies of under 34 weeks gestation. Infants who had serious intraventricular or intracerebral hemorrhage and then had progressive ventricular dilatation were randomized when they reached the 97th percentile of ventricular width (as long as the anterior horn width was at least 6 mm). At that point they either had intervention immediately or waited until they reached 4 mm more than the 97th percentile (with an anterior horn width of >10mm).

The second intervention group was consistent with usual practice in many centers, but that threshold was based on very arbitrary criteria. There had never been a good trial to find out if that is the best time to intervene, but some observational data suggested that earlier intervention might lead to better long term outcomes, and, perhaps more surprisingly, fewer permanent VP shunts. de Vries LS, et al. Early versus late treatment of posthaemorrhagic ventricular dilatation: results of a retrospective study from five neonatal intensive care units in The Netherlands. Acta Paediatr. 2002;91(2):212-7.

In the early intervention group, infants had serial lumbar punctures (maximum of 3) and then a ventricular reservoir which was tapped up to twice a day to achieve stability of ventricular size, at less than the 97th percentile. If taps were still needed after 28 days, and the baby met other criteria for shunting, a permanent VP shunt was then inserted.

In the late intervention group the same approach was taken, but starting when the ventricular index was more than 4mm above the 97th percentile.

The primary outcome for this phase of the trial was death or VP shunt placement several dutch centers were involved as was Andy Whitelaw’s group in Bristol (I think Andy has retired now, but they still let him be the last author!) 126 babies were randomized, with similar characteristics in the 2 groups. In the early intervention group they therefore started treatment with lumbar punctures immediately, and 40 of the 62 in that group (not including the 2 deaths) then had a reservoir. In the late group 36 of the 58 who survived had serial lumbar punctures, and 27 then had a reservoir. 12 in the early group, and 14 in the late group had a ventriculo-peritoneal shunt. 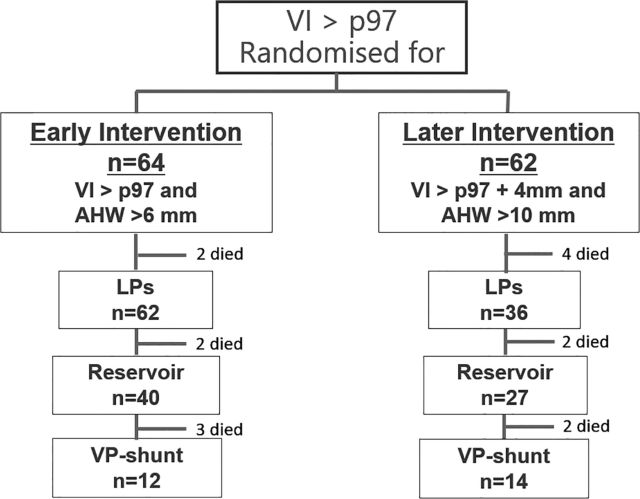 This flow sheet should clarify those data.

This increase in interventions could easily be justified if the long term outcomes are improved, those results will be coming, I would guess, within the next year or so. Until then we will have to keep asking “baby, what you want me to do?”

I am a neonatologist and clinical researcher at Sainte Justine University Health Center in Montréal
View all posts by Keith Barrington →
This entry was posted in Neonatal Research and tagged intracranial hemorrhage, Randomized Controlled Trials. Bookmark the permalink.

5 Responses to Its now or… later? A good question to ask ELVIS.