Opioids and Cerebral Development in the Newborn

Posted on 31 October 2012 by keithbarrington

An extremely interesting “ratling” study from the latest “Neonatology” (Dührsen L, Simons SHP, Dzietko M, Genz K, Bendix I, Boos V, Sifringer M, Tibboel D, Felderhoff-Mueser U: Effects of repetitive exposure to pain and morphine treatment on the neonatal rat brain. Neonatology 2013, 103(1):35-43.) The authors took baby rats on day 1 and looked at the effects  of pain and morphine treatment on cell death in their brains.

The study design is a bit complicated, they had 7 different experimental models, each of which was divided into 3 groups, 1 with severe pain, another with mild pain and a 3rd control. The 7 different models are 3 pairs of protocols, one with and one without morphine, as well as a 7th protocol performed at a later postnatal age, without morphine. All the morphine injections were given 30 minutes prior to the heelpad injections which were used to create the painful stimulus.

What they showed was that pain is bad for your brain! There was substantial neuronal cell death, mostly apoptosis in association with 3 days of severe pain, which was much worse than 3 days of mild pain, after 5 days of injections the apoptosis was equally important in the two groups. When the studies were done later in life (day 13) there wasn’t any detectable effect.

When morphine was given before the painful stimulus it substantially reduced the apoptosis, the figure below is from the publication and shows the preventive effect of morphine against apoptosis in the group that received painful injections for 3 days. 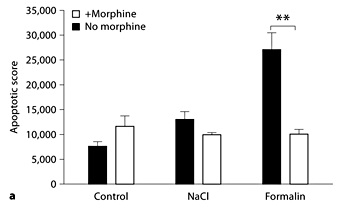 This is important because there is a lot of concern about the potential long term toxicity of various analgesic or anesthetic agents in the newborn, and previous studies of the effects of morphine in the absence of pain have shown adverse effects.

Although you obviously can’t extrapolate from this to what happens in newborn infants, it points out that the effects of various analgesic agents might be very different if the model has a painful stress or not.

I am a neonatologist and clinical researcher at Sainte Justine University Health Center in Montréal
View all posts by keithbarrington →
This entry was posted in Neonatal Research and tagged Analgesia. Bookmark the permalink.