Gene therapy for SMA; who will win the lottery?

Posted on 10 January 2020 by Keith Barrington

There are few things more disgusting than the obscene actions of drug companies that profit off the distress of dying babies and their families.

You might think that the price of a drug would be based on development and production costs and a reasonable profit margin.

You would be wrong.

Drug costs are based on how much the drug company think they can gouge out of our medical systems.

The dramatic, almost miraculous, impacts of gene therapy for Spinal Muscular Atrophy (SMA) made me hopeful that we could perhaps have a long term cure for this most atrocious of diseases. The reality is that the company that is profiting from the years of publicly funded research into SMA is only interested in their profits, and have no interest in the pain of families with a new diagnosis.

For those who are not specialists, SMA is a disease of the nerves which control movements, there are several types with the most severe forms appearing within the first few weeks of life and progressing to respiratory failure and death within a few months, milder forms can allow longer survival, and some more mildly affected people can live much longer lives. It is a recessive condition, so affected babies receive one abnormal gene from each parent, genes which control the production of a protein called SMN. SMN has multiple functions including in spinal motor neurones. If we could correct the genes at an early stage before there are secondary effects, then we could perhaps improve production of SMN, and correct the disease.

Let’s be clear, it is publicly funded research that determined which genes were implicated in this disease, in how the gene controllers were important, what were the precise abnomalities in gene transcription that lead to the reduction in SMN production, what are the relative importance of the SMN1 and the SMN2 genes etc.: the vector used for this disease was developed using public money, and the first trials of gene therapy with the vector in animal models were funded by the NIH as well a studies in transgenic mice which showed correction of the genetic defect and improvement in motor function followed vector injection. The actual product tested and administered to babies in the study that I talk about below was made in the Nationwide Children’s Hospital in Columbus OH, not in the labs of the company sponsoring the study. Interestingly, at least one of the authors on those animal studies was listed as being at the research institute of Nationwide, but the same author is now listed as being an employee of Avexis.

By engineering adenoviruses to carry a normal gene, it was shown in animal models that the motor neurone cells involved in the disease could be manipulated to produce more of the SMN, which might improve function, and finally initial trials in a small number of human babies seemed to be succesful.

Babies with a recent diagnosis were treated with a single intravenous infusion of the vector associated with an engineered human SMN gene and a gene promoter region. A recent publication following up the participants (Lowes LP, et al. Impact of Age and Motor Function in a Phase 1/2A Study of Infants With SMA Type 1 Receiving Single-Dose Gene Replacement Therapy. Pediatr Neurol. 2019;98:39-45) appears to show that those who were treated earlier had better motor outcomes, and those treated with less severe motor abnormalities at the time of treatment had nearly normal scores as they were followed up. The baby treated latest is the one who didn’t really improve on this figure showing the motor function of the participants, with higher CHOP-INTEND scores being better and 64 being the maximum possible score. 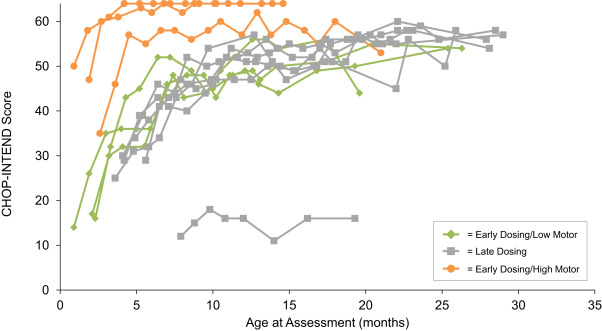 Of note the initial and the follow up studies were sponsored by the manufacturer, and many authors are employees of the manufacturer. In the follow-up paper they only report the outcomes of the 12 babies who received the higher dose, the 3 initial babies who received the low dose seem to have disappeared from the publications, including another publication about the general health outcomes of those 12 babies. (Al-Zaidy S, et al. Health outcomes in spinal muscular atrophy type 1 following AVXS-101 gene replacement therapy. Pediatr Pulmonol. 2019;54(2):179-85). That publication shows that the 12 higher dose babies were in dramatically better health than ever seen in babies with Werdnig Hoffman disease (as we used to call it), and some seemed to continue to improve, by about 2 to 3 years of age. They weren’t completely asymptomatic, many had episodes of needing BiPAP during hospitalisation for respiratory infections, for example.

It is possible that, in the more long term, the therapy will have a limited duration of action, maybe the genes inserted by the vector will be selected out over time, or who knows what else might happen. The longest follow up of the babies is still relatively short. Despite this the therapy has received regulatory approval and is now for sale in the USA.

Of course the producers of the therapy are pricing it to recoup their development and production costs but also to try and make it available for as many babies as possible… NOT!

Avexis the producer (which is part of the Novartis group) has the following nauseating statement on their web page :

Since 2013, AveXis has had one focus: bringing change to those devastated by genetic diseases.

The AveXis culture embraces this mission. As a compassionate and dedicated team, we are enthusiastic about the science behind our work, breaking barriers, and finding answers to difficult questions. We are dedicated to communities affected by rare diseases, and these patients and families are the motivation for everything we do

At least, it is nauseating when you compare those high-flown sentiments to the reality of their actions. The price set for what they are calling Zolgensma is 2.125 million dollars US, for what is intended to be a single, one-time-only dose.

And, in a twist that sounds like it comes from a dystopian Sci-fi novel, the company is holding a lottery to give away 100 doses of the drug to those who win the lottery who cannot otherwise access it, apparently only in countries where the drug is not licensed, which might actually be illegal in many places, and with no follow up of the lottery winners. Canadian parents are already trying to get in on the lottery, as Zolgensma is not currently licensed here.

What genius in the marketing department thought that a life or death lottery was a good idea? Had they just read ‘Hunger Games’, and thought, “wow that sounds like such a great way to do things, how can we use those brilliant ideas with our new treatment”?

Interstingly also, a web page which reports news from the pharmaceutical industry notes that the drug has saved many lives and the industry is ecstatic about their contribution to the health of humanity….. er, no. It notes that the drug made the company 160 million dollars in the first full quarter of availability; there is no mention of the human impact of the therapy, just that it is a good little money maker.

If there is enough profit margin in this drug to give away 100 doses (which clearly doesn’t mean giving away 213 million dollars, but probably willl mean a 213 million dollar tax write-off for the company) then why not reduce the price?

The incidence of severe neonatal SMA, so-called “SMA type 1” is about 1:10,000. With about 90,000 births in Quebec every year we should need to treat 9 babies a year, that would be about 25 million Canadian Dollars a year, for a population of 8 million. For the whole of Canada we are talking about 125 million dollars, and for the whole of the USA that would be about 1.2 billion dollars a year going into the pockets of Novartis.

There is no way our health care systems can bear this sort of profit-taking from industry. In addition to the already incredibly high costs of immune based therapies for malignancies, and other enormously expensive treatments, what will happen when gene therapy for cystic fibrosis becomes available. which is 10 times more frequent?

How can an intervention like this, developed entirely with public funds, be hijacked at the last minute by one of the world’s richest companies?

The only private funding in the development process, it seems, was for the uncontrolled study in 15 babies, which would be very surprising if it had cost more than a few hundred thousand dollars. They will have needed to invest to ramp up a production facility and have good quality control, and so on, but $2,125,000 a dose?

We need to rethink all this. The capitalist model of unrestricted profit-taking with pharmaceutical companies making whatever money they think they can get away with on the backs of dying babies (or adults, or the chronically ill), really needs to be changed.

I don’t know how the scientists involved in the development of this therapy, now working for Avexis, can sleep at night; I guess they now probably own their own yachts so the gentle rocking from the waves helps them to forget that they once had a conscience.

I am a neonatologist and clinical researcher at Sainte Justine University Health Center in Montréal
View all posts by Keith Barrington →
This entry was posted in Neonatal Research and tagged Ethics, gene therapy, Spinal Muscular Atrophy. Bookmark the permalink.

2 Responses to Gene therapy for SMA; who will win the lottery?