Oxygen for resuscitation of the very preterm

Posted on 17 December 2019 by Keith Barrington

One of the paradoxes of neonatal respiratory control physiology is that hypoxia depresses respiration whilst hyperoxia stimulates breathing efforts. In fact it’s not such a paradox, prolonged hypoxia in adults decreases respiratory drive also.

But could this be relevant in the delivery room?

We still don’t know how we should start resuscitation for very preterm babies, it seems likely that 21% oxygen is too low, but how high should we go? If we start with too low an oxygen concentration the infant will stay with a lower oxygen for longer and this may depress their own respiratory efforts, but if we start too high then they may suffer oxidative stress, and we might trigger a cascade of injury to the lungs and other organs.

We really need I guess, multiple trials of differing initial concentrations of oxygen, and differing ways of adjusting the concentration during the first few minutes. The eventual primary outcome of such trials will have to be clinically important complications of prematurity, but as an interim the immediate impact of the intervention is an important pointer to what we should be studying.

Here is one such trial: Dekker J, et al. The Effect of Initial High vs. Low FiO2 on Breathing Effort in Preterm Infants at Birth: A Randomized Controlled Trial. Frontiers in Pediatrics. 2019;7.

In this trial from Leiden and Melbourne they randomized and obtained respiratory recordings from 44 infants born before 30 weeks. Babies were started on either 30% oxygen of 100% oxygen, in the 30% group they followed a current typical practice of increasing FiO2 if the babies SpO2 stayed below the Dawson 25th percentiles; the 100% group were weaned from O2 once their saturations were over 90%. You can see what happened to the SpO2 and the FiO2 in this figure: 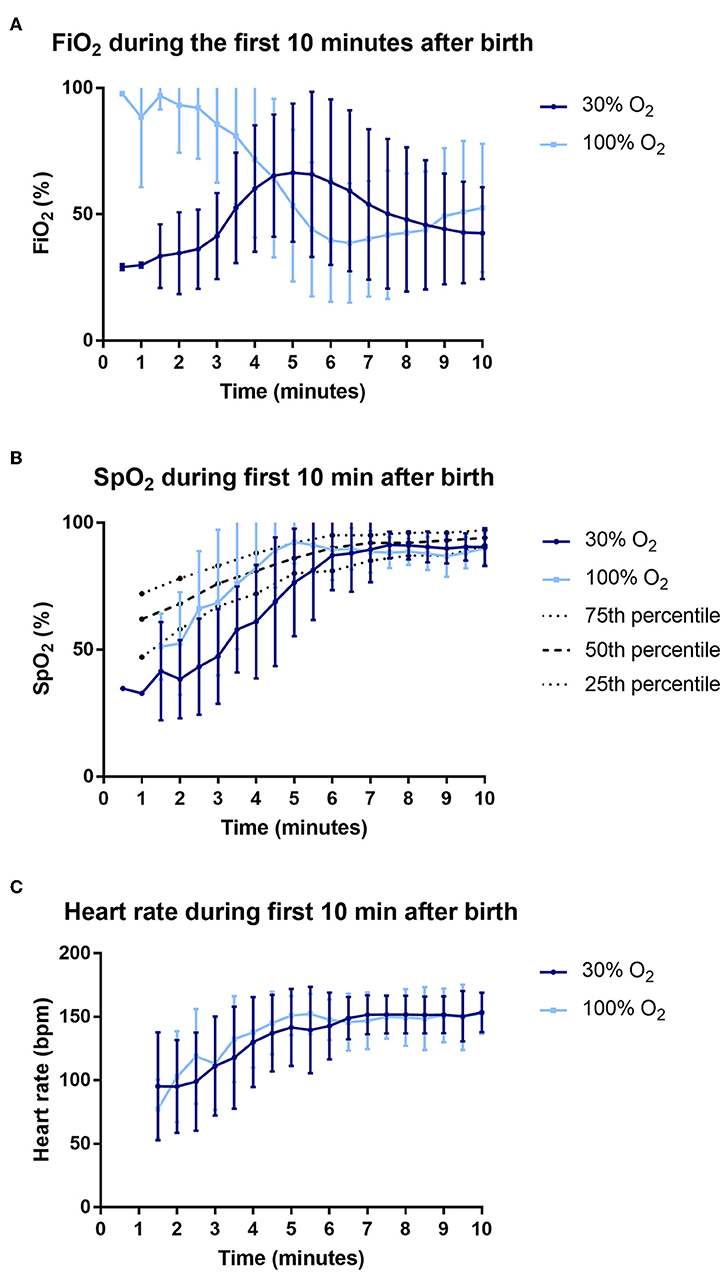 You can see that the heart rates were equivalent in the 2 groups, and that the 100% O2 group rapidly decreased their O2 requirements, so that between 5 and 8 minutes of age they were actually receiving a lower FiO2 than the 30% babies who were increased by protocol to 50% and then 100% if they were below the goals saturations.

The main outcome of interest in the study was the spontaneous minute volume of the babies, which you can see below, the differences were due both to differences in tidal volume and in respiratory rate. 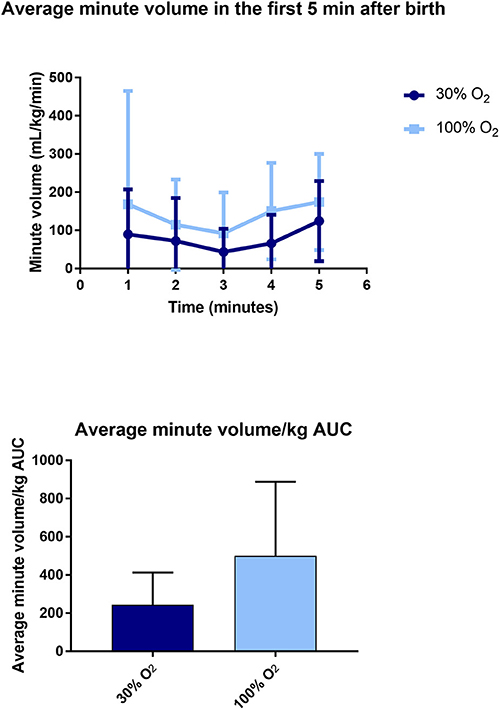 They also measured other parameters of respiratory effort such as mean inspiratory flow rate, and how much time they needed to have positive pressure ventilation, and showed that the 100% oxygen babies had higher drive.

Because of the rapid wean of FiO2 in the 100% group and the increase in the others there was a lot of overlap of total oxygen exposure and although it was somewhat higher in the 100% oxygen group, there wasn’t really much difference; they also measured one index of oxidative injury, 8-iso-prostaglandin F2α, which wasn’t different between groups.

I must say I have become allergic to 100% oxygen over the years, and I wonder if 80 or 90% might not be even better? Taking an immature lung bathed in low PO2 fetal lung fluid and exposing it immediately to pure oxygen just doesn’t sound like a good idea. At least mixing a bit of nitrogen with the O2 might help to prevent atelectasis and the rapid influx of polymorphs into the lung while still having the benefits of the increased saturations allowing the rapid development of good respiratory drive.

I am a neonatologist and clinical researcher at Sainte Justine University Health Center in Montréal
View all posts by Keith Barrington →
This entry was posted in Neonatal Research and tagged oxygen therapy, oxygen toxicity, Randomized Controlled Trials, Resuscitation. Bookmark the permalink.

2 Responses to Oxygen for resuscitation of the very preterm