Posted on 9 December 2019 by Keith Barrington 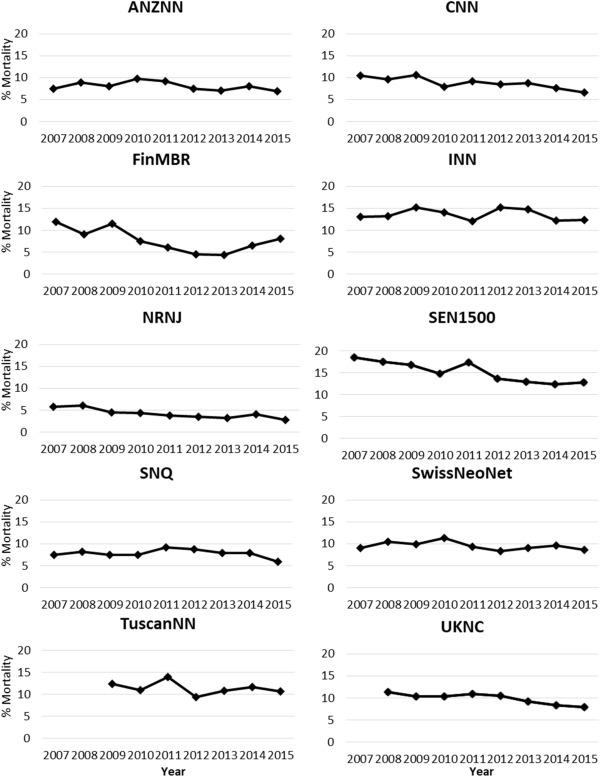 Although smaller samples seem to imply that mortality has plateaued, larger databases (and the size of these databases varies hugely from a total of 1500 babies in one, to over 30,000 in the Japanese) do still show a progressive decrease in mortality as we continue to improve our care of very preterm babies.

The data don’t include babies under 24 weeks because of different approaches in the different countries; distribution of gestational ages also differs somewhat between countries, with the Japanese network reporting 8.5% of the babies were 24 weeks, compared to as low as 5.4% in the Swiss units. That difference in distribution should be taken into account in any comparison.

Also encouraging is that the improved survival has not been accompanied by worse complications, frequency of severe brain injury and treatments for RoP are relatively static despite more survival. There seems overall to be a small reduction in servious brain injury (which includes grade 3 and 4 hemorrhage and persistent peri-ventricular echodensity or echolucency) rates differ between countries (which has many potential explanations, including differences in screening interpretation and definition), but most of the larger database show a reduction between the first and second halves of this period. There is a slightly clearer reduction in RoP receiving treatment also.

In contrast there has been a significant increase in BPD during the interval, except for in Canada, where the rate has been falling. So when the different outcomes are put together as composites, (mortality or treated RoP or severe neurologial injury, with or without BPD) you see this: 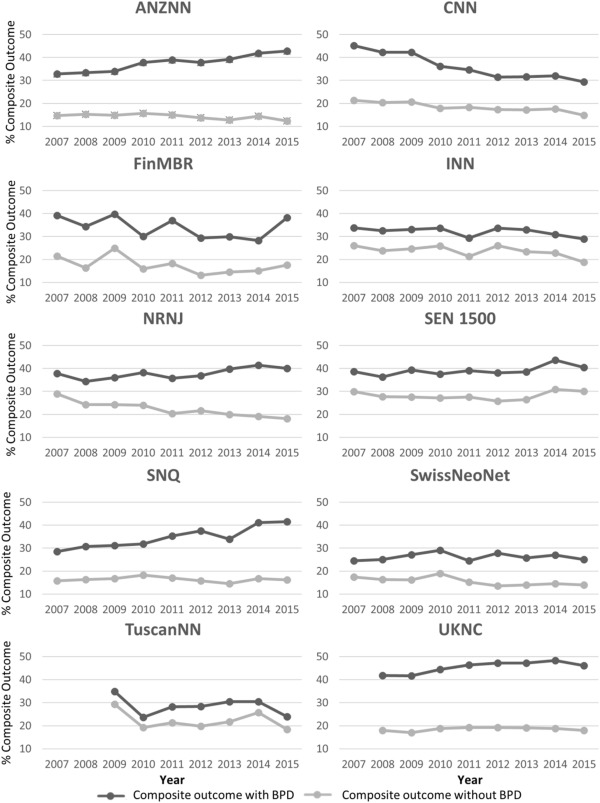 Much of the data would suggest that the cost of having more babies survive is more lung injury, and in a sense I think that has to be true. More babies who ‘should’ still be in utero with their lungs exposed to the low PO2 lung liquid being secreted into their lungs to help them grow and develop, who are exposed to gases instead containing huge amounts of reactive oxygen, disturbed mucus movement, plasticisers and nasty microbes; that has to mean more lung injury. But the Canadian experience suggests we can perhaps have an impact on the severity of those changes. Of course the definition of BPD used was oxygen at 36 weeks gestation which has limited clinical utility, but for these kinds of large database studies is at least simple.

I think the co-ordinated national quality improvement initiatives are having an impact on outcomes, and whatever it is we are doing is improving the outlook for our patients.

One thing that the publication makes clear is that my comments in a previous post about RoP screening can’t necessarily be directly instituted in other countries. Retinopathy requiring therapy was less frequent in the Canadian Neonatal Network, (CNN) than some other countries, but more frequent than in others. The differences between, for example, Japan and Switzerland are enormous about a 6-fold difference, and the same screening criteria wouldn’t work for the 2 countries.

I am a neonatologist and clinical researcher at Sainte Justine University Health Center in Montréal
View all posts by Keith Barrington →
This entry was posted in Neonatal Research and tagged intracranial hemorrhage, mortality, Retinopathy of Prematurity. Bookmark the permalink.

1 Response to International variations in outcomes of extreme preterm infants