Sail Away, Sail Away…

Posted on 8 April 2019 by keithbarrington

You could probably guess that a post about the SAIL trial (Kirpalani H, et al. Effect of Sustained Inflations vs Intermittent Positive Pressure Ventilation on Bronchopulmonary Dysplasia or Death Among Extremely Preterm Infants: The SAIL Randomized Clinical Trial. JAMA. 2019;321(12):1165-75.) would have to be accompanied by this, as it was when I reported on the presentation at last years PAS :

This is the multicenter randomized controlled trial of sustained inflations at the onset of resuscitation for very preterm infants less than 27 and at least 23 weeks gestation. Enrolled babies received face mask CPAP for up to 30 seconds, and if they needed PPV (i.e. apneic or gasping or heart rate <100) then they were randomized to sustained inflation or standard NRP. Sustained inflation babies started with a 15 second inflation at 20 cmH2O, they were then evaluated on CPAP and, if apneic or gasping or heart rate < 100, they switched to standard NRP, if those things didn’t apply they received a second sustained inflation to 25 cmH2O for 15 seconds. All of which was rather arbitrary, in terms of indications, pressures, and durations, but there wasn’t any reliable data to make more evidence based choices (and still isn’t).

The primary outcome of the study was the infamous “death or BPD”, which I have criticised here frequently enough, I think, but just to be really annoying; being dead and having oxygen at 36 weeks PMA are not equivalent, and a composite outcome which combines them risks the real potential that they could change in opposite directions, and show no effect, or that mortality changes will be overwhelmed by the much more frequent occurrence of BPD. Mortality as one outcome and BPD among survivors, as another outcome makes much more sense. Even better would be a measure of lung injury which reflects respiratory outcomes of importance to families.

As many of you will know by now, the study was stopped by the DSMC after enrolment of 460 patients because of an excess of early deaths (under 48 hours of age) in the sustained inflation group, many of which were considered to be possibly associated with the intervention. As well as stopping the trial the DSMC mandated a Bayesian analysis, which revealed that it was highly unlikely that sustained inflation would be shown to be preferable if the study had continued, and that either a null result, or an advantage of standard care were far more likely results. 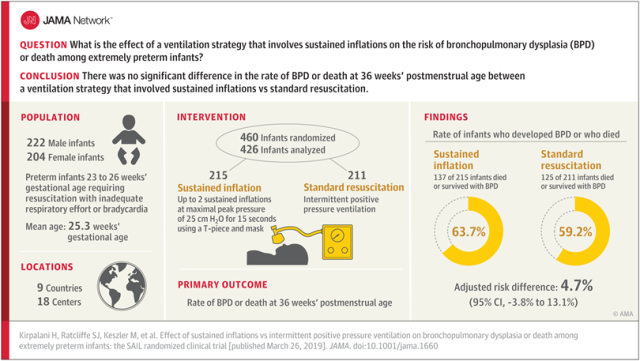 Failing that, I think that sustained inflation as routine initiation of resuscitation of the preterm infant should be laid to rest.

The authors have done what other trials have also done recently, which is to report BPD at 36 weeks, or death at 36 weeks as being the components of the primary outcome, I still don’t understand this, as it means that death after 36 weeks without BPD is considered a good outcome! Why not survival to discharge as part of the composite? The authors collected survival to discharge (it is secondary outcome number 22), but I cannot see the result in the article or appendix.

My recent discussions about significance and how to refer to results are well illustrated by the following sentence from the discussion.

An unexpected excess mortality rate with sustained inflation in the first 48 hours of life led to early trial closure, although mortality at 36 weeks’ postmenstrual age was not different.

Well, pardon me, but as far as I am concerned 20.9% IS different to 15.6%, they are clearly different numbers! Because the difference between 2 numbers is not “statistically significant” does not make them the same. As you can see from the survival curves below, they are a bit closer together at 12 weeks than they are at 7 days, but they remain different. It would be accurate to say, ‘the p value for the difference in death at 36 weeks is 0.17 with a relative risk of 1.3’, and to note that ‘relative differences in mortality at 36 weeks which are compatible with the data, range from a 10% decrease with sustained inflation, to a 90% increase ‘; but not just to say they are “not different”.

Other secondary outcomes vary between those which are practically identical between groups, such as severe IVH (9.8% vs 10.4%), and those which are very different, e.g. pneumothorax (5.1% with SI vs 9% standard NRP). None of them were “statistically significant”.

Almost simultaneously appeared in print the following Tingay DG, et al. Gradual Aeration at Birth is More Lung Protective than a Sustained Inflation in Preterm Lambs. Am J Respir Crit Care Med. 2019 a very interesting study in preterm lambs examining a sustained inflation strategy, where they used 35 cmH2O and maintained it until there was no more volume entering the lungs, and then for another 10 seconds. This was compared to ventilation with PEEP, and a 3rd strategy of ventilation with PEEP, and added progressive increases in PEEP until compliance was maximized, at which time, PEEP was progressively decreased. The sustained inflation group had very uneven lung aeration, and increased signs of lung injury. This confirms I think that we could still have some benefit from finding novel ways of ensuring early adequate uniform lung inflation, but simple sustained inflation is not the answer, at least in the immature lung.