Probiotics: so what about those ELBW babies?

Posted on 24 September 2014 by Keith Barrington

After a comment to my previous post about probiotics, I wanted to clarify what I said about the ELBW baby, that is, the newborn with a birth weight below 1001 grams.

It is true that there are few studies that have reported outcomes separately under 1kg, I referred to the 3 articles quoted by the authors of the commentary. In fact one other article reported a study which was exclusively in ELBW, that is Al-Hosni et al. They had 50 patients per group and 2 cases of NEC per group.

However, in many of the other studies there were large proportions of the babies who were under 1 kg.

If we redo the meta-analysis with only those studies that were restricted to the very low birth weight, (excluding even Dani and Sari above) there are over 3,600 babies in the trials, all under 1500 grams, with an average birth weight below 1200 grams in all of the studies.

In other words there are substantial numbers of babies under 1001 grams in these studies, probably around a third of them, with probably, given the birth weight distribution of NEC, at least half of the cases of NEC. (In the CNN database over the last few years about 60 to 66% of NEC cases among the VLBW babies were among those who were under 1001g)

Here is the Forest Plot:

As you can see the effect on NEC is significant p<0.00001, with little heterogeneity, and a relative risk of 0.45.

And the Funnel plot of the same data: 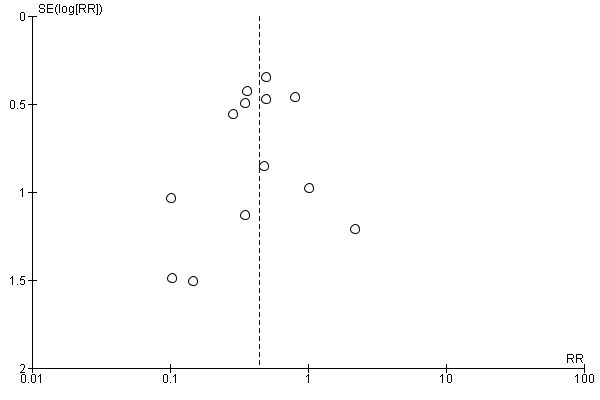 Is there any other therapy in the NICU where we demand separate evidence for the ELBW when it is clearly proven to be effective in the VLBW (which includes a large number of ELBWs)?

I can’t think of any, nor of any other therapy tested in RCTs which only enrolled VLBW infants and which have included 3,600 VLBW babies.

The demand for specific studies in ELBW babies is bogus. Babies over 1 kg get NEC also, so why would anyone exclude them from trials of NEC prophylaxis?

I am a neonatologist and clinical researcher at Sainte Justine University Health Center in Montréal
View all posts by Keith Barrington →
This entry was posted in Neonatal Research and tagged Necrotising Enterocolitis, Probiotics, Randomized Controlled Trials, Systematic Reviews. Bookmark the permalink.

4 Responses to Probiotics: so what about those ELBW babies?