Posted on 17 December 2012 by Keith Barrington

The new Epicure 2 data show encouraging trends in outcomes in the UK and Ireland for extremely preterm babies. Survival rates have improved significantly over the whole of the British Isles, Here for example is one of the figures from the long term outcome publication. 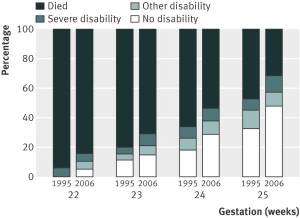 Now you can interpret these data according to your own prejudices, and that is indeed what has been happening. The editorial accompanying the publications in the BMJ was very negatively slanted. That editorial, written by 2 individuals from the Netherlands, includes the following quotes ‘a greater absolute number of neonates had major morbidity’, ‘the prevalence of important adverse neurological and developmental outcomes had indeed not improved’ and ‘of 100 neonates born at 24 weeks, 60 will die despite intensive care, and of the 40 survivors 12 will have serious impairments’ (this is actually a serious error! Fifteen or nineteen percent of the survivors at 24 weeks gestation had serious impairments, which means that of the 40 survivors in their scenario there would be 6 or 7 with serious impairments).

I think that anyone looking at the graph at the top of this post without any pre-existing prejudices (like me for example) would say that there have been major advances. In the context of a huge increase in the absolute number of extremely preterm infants, there are major improvements in survival with a stable proportion of impairments among the survivors. With an overall prevalence of severe disability among the survivors of 19% why do we persist in focusing on those infants? I know it is vitally important that those infants receive early evaluation and effective services and interventions. But surely we can also emphasize that 81% of these infants, who would all be dead if it wasn’t for NICU, are free of serious impairment.

The authors of the editorial appear to be of the opinion that it is OK for 81% of the potential survivors to die to avoid the survival of the 19% who have severe impairments. I beg to differ.

I am a neonatologist and clinical researcher at Sainte Justine University Health Center in Montréal
View all posts by Keith Barrington →
This entry was posted in Advocating for impaired children and tagged Ethics, Handicap, long term outcomes. Bookmark the permalink.