Posted on 9 October 2012 by keithbarrington

At the EAPS meeting in Istanbul, the Proprems trial results were just presented. Now this has not yet been subject to full peer-review, but as a report of a large multicenter RCT it is not likely that their main findings will change. The study was powered for a reduction in late-onset sepsis, which I would maintain was the wrong outcome, we already had good data that there is no effect of probiotics on this outcome from the 20 previous trials. However that was the decision of the investigators, so they had close to 550 babies per group: 1. placebo, 2. A mix of two Bifidobacteria,infantis and lactis, and Strep thermophilus.

The investigators had less definite NEC (grade 2 or more) than expected. 4.4% in the placebo group. Nevertheless they found even less NEC in the probiotic group (2.2%). Now I don’t have all the details or the exact sample sizes, but that reduction is pretty close to being significant at 0.05, and to be honest if it is 0.051 or 0.049 doesn’t matter a ha’penny (as an Mancunian might say).

The effect size of the Proprems trial on NEC, expressed as a relative risk, is well within the confidence limits of our expectations from prior systematic review (0.5 compared to 0.4; CI 0.29 to 0.55).  Now I don’t have all of the info about the trial and I don’t have the exact numbers, but slightly different exact numbers have almost no effect on the conclusions of an updated meta-analysis; the Proprems trial serves to narrow the confidence interval of the meta-analysis slightly. Shown below is an updated Forest plot using all of the available studies (Girish Deshpande is already working on doing this correctly, and most likely Khalid AlFaleh as well) but this is a very quick initial run at it, don’t quote me! 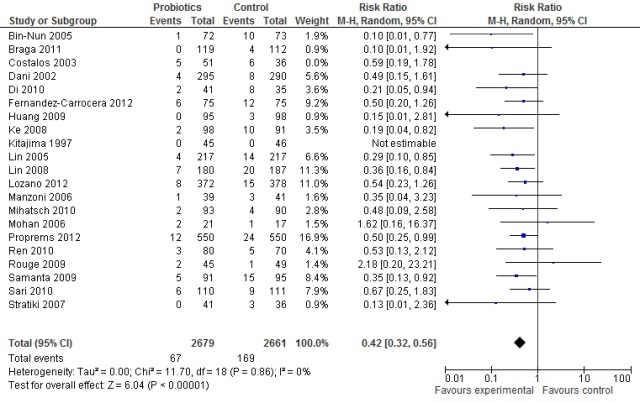 One of the interesting things that will no doubt be addressed by the authors is why the control group rate of NEC was so low? The ANZNN database reports previously showed that infants under 28 weeks (to be in Proprems you had to be under 1500 g and under 32 weeks) had a NEC incidence much higher than that, at around 10%. So either a lower risk group was enrolled, which is a possibility, or some other study characteristic decreased NEC in both groups. My first guess is that to be in Proprems you had to entered before 72 hours of age, so maybe infants who were more unstable and at higher risk tended not to be approached or did not consent.

In any case, one of the endless criticisms of previous trials was that they were in high risk groups. The new trial shows that probiotics work in a low risk situation also.

What now? All potential participants in other placebo controlled trials should be informed, MUST be informed, of this information. In a non-biased manner.

Are there still physicians who could honestly continue to randomize children to placebo? It has been many years since I would have been prepared to do so, and we have been giving probiotics routinely in my NICU now for 16 months. Our results, a prospective cohort study, are being prepared for presentation and publication as I speak, but they are not inconsistent with the systematic reviews.

Importantly NEC still exists, we might reduce it by about half with probiotics, but some babies, too many babies, still get this devastating disease. In fact it seems that the cases that we still get occur earlier than the mean age in the past (early analysis of my cohort study, to be confirmed), early onset NEC may not be affected by probiotics, perhaps the pathophysiology is different. Or maybe we need to be giving probiotics to the mothers before delivery to try and ensure normal early gut colonization, rather than waiting till they start feeds (which is our current policy) when they already have an abnormal microbiome, and it may take a while to replace the nasty little buggers with good friendly germs.

As for on-going and future studies? Enough is enough! We have more than enough data to stop randomizing babies to placebo. We need to start doing other studies to answer the important remaining questions:

Answering these questions will need very large trials, but current models of performing large trials make them very expensive, 3 million dollars for a trial of 1000 babies would not be unusual, our HIP trial of hypotension treatment in the preterm will cost about 5.6 million Euros for 800 babies. So we need to set up large permanent neonatal research networks that can perform trials that are simpler than in the past, on an ongoing basis, that are multinational, not just multicenter, that are freed from some of the excessive regulation and constraints that currently impede important research questions from being answered, but that still have mechanisms in place to protect babies from unexpected harms.

I am a neonatologist and clinical researcher at Sainte Justine University Health Center in Montréal
View all posts by keithbarrington →
This entry was posted in Neonatal Research and tagged Probiotics, Randomized Controlled Trials, Systematic Reviews. Bookmark the permalink.

2 Responses to Probiotics: enough is enough