I don’t post much about animal studies, but there are some things which are extremely difficult to study in human babies and at least for preliminary studies they may be essential and very informative. That great Melbourne group has been looking at the effects of prolonged inflation time on response to resuscitation. Both in preterm animal models, and in asphyxiated near-term models.

They have shown that in rabbit cage experiments, preterm rabbits using a sustained inflation, of for example 20 seconds achieves an FRC much faster. The publications from 2009 show a fascinating series of images from phase-contrast x-rays showing the difference in lung volumes: I reproduce one here 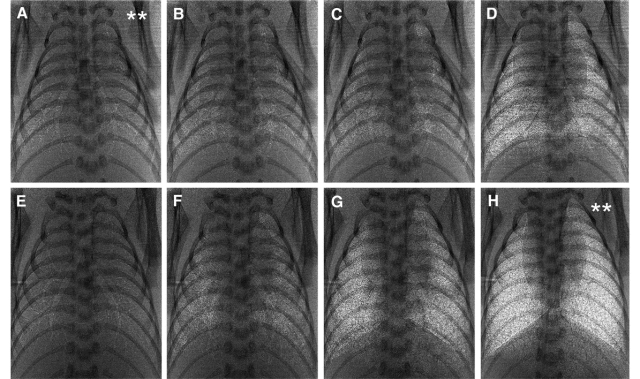 Phase contrast x-ray images from prematurely delivery newborn rabbit pups ventilated from birth. Top panel are the images from the group with no SI (1 s in duration; images A, B, C, and D). Bottom panel are the images from the group with SI of 20 s (images E, F, G, and H). Images were acquired at 1 (A and E), 5 (B and F), 10 (C and G), and 20 (D and H) s after birth. The double asterisks (**) indicate images acquired at the end of the first inflation. Images acquired after the first inflation were acquired at end inspiration.

One could reasonably ask if that is  a good thing? Does achieving a good FRC faster really help? Well a new study from the group, this time in asphyxiated near-term lambs, would certainly suggest that a clinical benefit is very much a possibility (Klingenberg C, Sobotka KS, Ong T, Allison BJ, Schmölzer GM, Moss TJM, Polglase GR, Dawson JA, Davis PG, Hooper SB: Effect of sustained inflation duration; resuscitation of near-term asphyxiated lambs. Archives of Disease in Childhood – Fetal and Neonatal Edition 2012.) In this study lambs ventilated with  a single ventilation of 30 seconds had a much more rapid recovery of their heart rate and blood pressure than did those with 5 x 3 second inflations with 1 sec expiratory time, or those ventilated at a rate of 60 per min with 0.5 sec inflations. So as well as increasing FRC cardiovascular recovery is faster with sustained inflations.

I must admit, that despite the lack of RCT evidence I have been doing this for many years, often I will take over ventilation when a baby is not responding immediately to the initial attempts (by a resident or someone following NRP guidelines) I will give a long inflation of 20 to 30 seconds (which is very long during a resuscitation) with a gradually increasing pressure. I have been doing this following the research from many years ago of Vyas and Milner. They showed that the apparent opening pressure of the lungs could be eliminated by such an inflation, and the lungs developed an FRC as a result of this maneuver. There has never been any poof that this improves outcomes of resuscitation, but given this physiologic evidence I have tried it many times, and very often a baby who was difficult to ventilate and bradycardic has responded with good chest movements (which I now know are probably excessive tidal volumes!) and improvements in circulation.

The next stage should surely be to examine the use of prolonged inflations in human resuscitation.

I am a neonatologist and clinical researcher at Sainte Justine University Health Center in Montréal
View all posts by Keith Barrington →
This entry was posted in Neonatal Research. Bookmark the permalink.