Prebiotics and preterms and probiotics.

Posted on 25 October 2018 by Keith Barrington

A selection of recent publications, regarding the issues in the title, that I find interesting and which seem to tell a consistent story.

From Nick Embleton’s group the following interesting study (Stewart CJ, et al. Longitudinal development of the gut microbiome and metabolome in preterm neonates with late onset sepsis and healthy controls. Microbiome. 2017;5(1):75) As an aside, I hate journals that put the methods after the discussion, it makes publications that have no chronologic sense, and the methods are the most important part of an article. I think that peer review would be improved if the only thing the reviewer got to see before deciding whether an article was worth publishing or not, was the methods section. The only way to know if results are reliable, and a discussion is reasonable, is from the methods. It might be OK sometimes if everyone always uses the same methods for an in vitro assay, I guess, but the most important part of a study involving humans, or samples from humans, are the characteristics of those humans, how they were recruited, how samples were obtained etc. etc. (End of small rant).

In this journal the abstract doesn’t even have a section marked “Methods” the only thing we know from the abstract about what was done is the last sentence of the “Background” section : “We performed temporal bacterial (n = 613) and metabolomic (n = 63) profiling on extensively sampled stool from 7 infants with LOS and 28 matched healthy (no LOS or NEC) controls.” In the first publication from this study, the authors described sequential stool samples from 318 preterm infants, of which there were 7 cases of NEC, who were matched to 28 controls, by gestational age, birth weight, and delivery mode. In that publication they showed that there were several patterns of gut colonization (which changed over time) and that the pattern with the microbial highest diversity never preceded NEC. As far as I can tell the babies were all 30 weeks or less gestational age.

In the new publication they report similar methods for 7 of the infants who developed late-onset sepsis (culture-positive), again compared to matched controls without sepsis or NEC.

Here is that figure 1 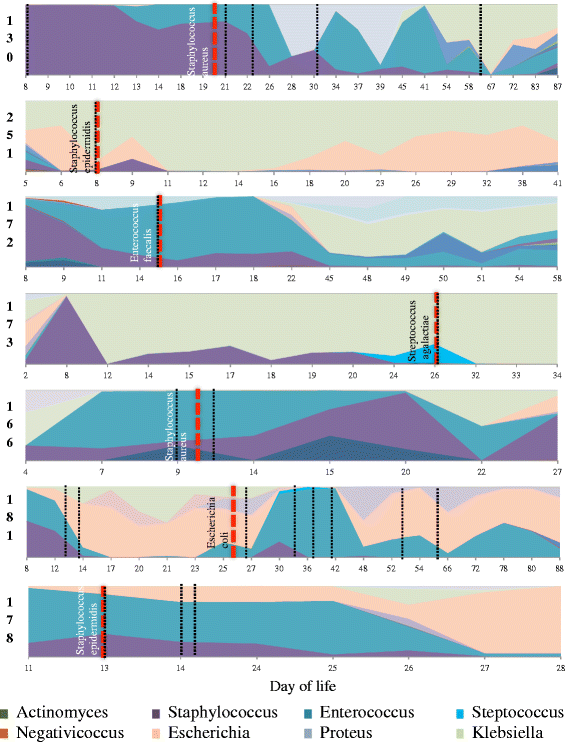 You can see here the case 181, for example, who had predominant E coli in the intestines prior to having sepsis with the organism, the same for case 172 and Enterococcus.

An OTU is an “operational taxonomic unit” and is a term used to define a group of bacteria that share the same 16s RNA sequences within a certain percentage similarity, (often around 98%) it is not exactly the same as a species or a genus.

They also showed that when you have lots of Bifidobacteria, you were a control, i.e. you didn’t get late-onset sepsis. The metabolomic findings in the gut seem to reflect the bacterial activity, at the time of diagnosis of sepsis, with Galactose metabolism being more active in the controls, and being associated with Bifidobacterial presence.

Jost T, et al. Impact of human milk bacteria and oligosaccharides on neonatal gut microbiota establishment and gut health. Nutr Rev. 2015;73(7):426-37. This is a review article from a Swiss group very active in the area, mostly interested it seems, in normal full term infants and how their gut gets colonized. They point out the importance of maternal-neonatal transfer of organisms such as Bifidobacteria and Lactobacilli. They discuss the presence of prebiotic molecules in milk, specifically those that are probably most important for maintaining the growth of probiotic organisms, the oligosaccharides, known as HMOs, human milk oligosaccharides, it seems to me from my reading that the HMOs which are the most important may well be the fucosylated HMOs, but sialylated HMOs might also be crucial, or the balance of different types.

Even though HMOs are a major component of breast milk, human infants can not digest them. They seem to be present solely to feed probiotic organisms, Bifidobacteria have specific glycosidases which digest HMOs, which most pathogens do not. The situation becomes even more complex in the preterm infant, in whom abnormal gut colonization with pathogens might actually be worse in the presence of some HMOs, which are neither fucosylated nor sialylated, those HMOs seem to be associated with increased growth of Enterobateria (the group that contains many familiar Gram-negative pathogens).

Breast milk from mothers who deliver preterm seems to have a lower and much more variable proportion of the HMOs fucosylated, whereas in term delivering mothers it was very consistent at just over 60%, in another study from the productive group at UC Davis.

Aakko J, et al. Human milk oligosaccharide categories define the microbiota composition in human colostrum. Beneficial microbes. 2017;8(4):563-7. This study showed that the different colostrum samples (from mothers delivering at term by elective caesarean) had differing concentrations of HMOs of differing types, and the types of HMOs were strongly associated with what organisms were most abundant in the microbiome of the mother’s milk. Overall, the more HMOs that were present, the more Bifidobacteria were present, and different HMOs seemed to be associated with different bacterial profiles.

Autran CA, et al. Human milk oligosaccharide composition predicts risk of necrotising enterocolitis in preterm infants. Gut. 2018;67(6):1064-70. Samples of milk being fed to VLBW preterm infants were collected, 10 of them developed NEC, 8 were stage 2 or 3. The milk they received prior to developing NEC had much lower concentrations of a specific HMO, disialyllacto-N-tetraose, compared to matched controls (5 per case). A few of the cases did in fact receive some formula (which you only discover by opening the supplementary materials), and I can’t see any mention of donor milk in the manuscript. The data do seem to suggest a fairly strong association between low maternal milk concentrations of this particular HMO and the development of NEC.

Meredith-Dennis L, et al. Composition and Variation of Macronutrients, Immune Proteins, and Human Milk Oligosaccharides in Human Milk From Nonprofit and Commercial Milk Banks. Journal of human lactation . 2017:890334417710635. Despite the title, this article is not really about the profit motive, it is about the composition of milk that came from 3 different sources, one the Mothers’ Milk Bank in San José, which uses standard Holder Pasteurization (62.5 degrees for 30 minutes), the second being Prolacta, which uses something called vat pasteurization (63 degrees for more than 30 minutes), and the 3rd Medolac, which uses a retort sterilization technique (121 degrees and 15 psi for 5 minutes). The group from UC Davis did extensive analysis of 3 samples from each source and found that the macronutrients were different: protein concentrations were highest with the Holder pasteurization technique (but the donor pool might have a few more mothers who delivered prematurely) and the fat content was lower with the retort sterilization.

To return to the HMO topic of the day “The concentration of total HMOs was about 2-fold higher and approximately 50% higher in samples pasteurized with Holder compared with retort and vat methods, respectively (p < .05).”

You can’t ascribe all of the differences to the pasteurization/sterilization method alone, as there are other differences in sourcing and manipulating the milks that are different, but the milks were clearly not identical, and other studies also show that the treatment methods have differing, probably adverse, effects on milk composition.

This might, at least partly, explain why donor human milk doesn’t seem as good as raw mother’s own milk, as a prevention for NEC and sepsis.

To put all this together, prebiotic molecules, particularly specific HMOs, found in fresh maternal breast milk promote the growth of probiotic organisms in the breast milk. Together the probiotics and prebiotics in breast milk promote the development of a bowel microbiome that predominates in Bifidobacteria. Abnormal bowel colonization is commonly found in the very preterm baby, and some patterns, especially those lacking Bifidobacteria, are closely related to the development of late onset sepsis and NEC. Milk which is lower in some HMOs seems to be a risk factor for development of NEC. Maternal milk is quite variable in composition and microbiome, and some of that variability might mean that some mother’s milk is less protective than others. Donor human milk, has most of the microbiome destroyed (on purpose) and exactly how it is treated has differing impacts on composition, including on probably protective components. Further supplementation of maternal and donor human milk feeds with probiotics, prebiotics, and potentially other bioactive molecules such as lactoferrin is a reasonable approach. Probiotic supplementation is already shown to reduce NEC, and to a lesser extent late-onset sepsis, but many studies show a relatively modest contribution of administered probiotics to the preterm intestinal microbiome  We need to investigate supplementation of maternal (or donor) milk with prebiotics, particularly the right HMOs; we may be able to make human milk even more efficacious as a way of preventing these complications.

I am a neonatologist and clinical researcher at Sainte Justine University Health Center in Montréal
View all posts by Keith Barrington →
This entry was posted in Neonatal Research and tagged breast milk, Necrotising Enterocolitis, Prebiotics, Probiotics, Sepsis. Bookmark the permalink.