Posted on 23 October 2018 by Keith Barrington

For those of you who are not of a certain age, and brought up in England, that title will not mean very much. When seat belts in cars were first made compulsory in the UK there was a widely quoted government advertising blitz, with the sound of a car door closing followed by the sound of a seat belt being fastened, the motto of the campaign was “Clunk Click every trip”. 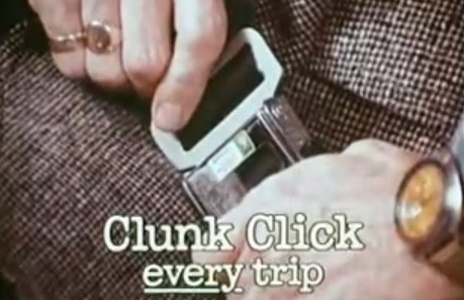 (Those hands probably belong to Jimmy Savile, the spokesman of the campaign; who later, mostly after his death, became recognized as a serial sexual predator, whose victims were in the hundreds)

But back to neonatology and the tricky problem of detecting hip dysplasia. As a young trainee I was taught the Ortolani and Barlow manoeuvres, and to differentiate between a “clicky hip”, common and, we were taught, associated with ligamentous laxity due to fetal exposure to maternal progestins, and a “clunk”, a feeling of movement of the joint associated with dislocation/subluxation of an unstable hip or reduction of a hip already subluxated. When I was in that phase of my development, oh these many years ago, there was no such thing as hip ultrasound and we sent hips with suspected “clunks” for x-ray.

Despite 40 years of practice the number of babies in whom I have personally detected an abnormal hip, in the absence of other associated conditions, i.e. those who should be picked up by a universal physical exam screening program, is tiny, perhaps 2. To be fair, I haven’t spent much time covering the term nursery during those years. I certainly started to teach other juniors how to examine hips before I had ever detected a new case myself!

A new editorial (Hall DM, Sowden D. Hip hip: no hurray. Arch Dis Child. 2018)
points out that I am not alone, many junior pediatric staff never see a case, and in the lifetime of a family practitioner maybe they will see 2 or 3. The editorial was written to discuss a program in Scotland that reports some results in the same issue of ‘Archives’. (McAllister DA, et al. Enhanced detection services for developmental dysplasia of the hip in Scottish children, 1997-2013. Arch Dis Child. 2018). Two regions in Scotland introduced enhancements to the neonatal screening programs and showed a reduction in the need for surgical treatment of hip dislocation, whereas in other regions the number of surgical cases were stable. Unfortunately it is not entirely clear what the enhancements in service really entailed, in one region a physiotherapist personally examined many hips, and did a lot of teaching, awareness promotion, and a clinic for secondary examinations. In the other region a physician set up a specific clinic providing secondary examinations and ultrasounds and helped to train medical and maternity staff how to examine the hip. There aren’t many more details about what they actually did, how many patients they saw directly themselves, what proportion had ultrasounds etc. In the region with the physician 31% of the babies over a 9 year period had “expert examination and ultrasound” but it would be impossible to try to copy these programs without much more detail, or to know which parts are most likely to be important.

This graph shows the different risks of surgery for “DDH” developmental dysplasia of the hip, in the 2 regions with the programs, where roughly one fifth of Scottish babies are born, where surgery became less frequent, about a 50% drop, and the remainder of Scotland over the same years where it remained stable. 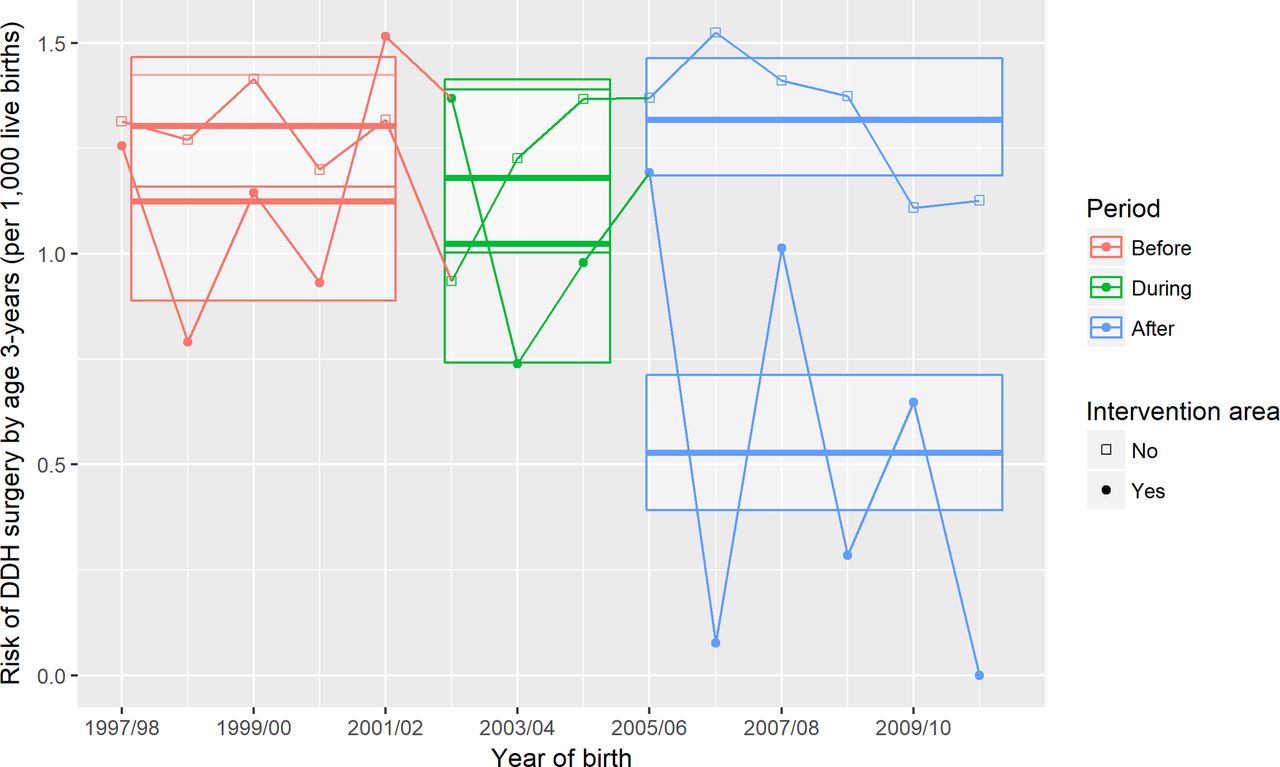 As far as I can tell surgery included both open and closed reductions of unstable hips, so it seems that these enhanced programs are associated with less surgical reduction, which is certainly a worthwhile goal, as long as all necessary surgeries are being done, and the long term outcomes are good.

Many screening programs are introduced without the kind of hard evidence that is needed and should be required prior to subjecting babies to the intervention. Even though the evidence for pulse oximetry screening for critical congenital heart disease is to my mind now quite convincing, the way in which the process of evaluating the programs started was really not optimal.

A very large randomized trial comparing standard detection algorithms in the real world, compared to the new screening approach, either as an add-on or as a replacement, should be the way these things are introduced. Blinded performance of the add-on method in the standard screening group adds to the data that can be generated, but is not essential.

Several jurisdictions have now introduced universal hip ultrasound screening for developmental dysplasia. Again without the kind of high-quality evidence that would be preferable, I wonder, for example  if universal screening is better than just screening girls, or just screening girls who were in breech? I wonder what is the sensitivity and specificity of a clinical hip exam, and what would be the gold standard for such an evaluation, presumably hip ultrasound? But minor degrees of hip abnormalities on ultrasound are known to sometimes improve. I also wonder what the best outcome measure for such a study should be?

I think I would like to know, when comparing approaches to screening, which approach leads to the lowest proportion of children who end up with disability. If disability is equivalent with 2 methods, then a smaller number of surgeries required to achieve the results would clearly be a benefit, if those numbers are also equivalent, then few children with splinting and non-surgical interventions would be of value for the child and families.One problem with this of course us that, with modern surgical methods very few children end up with significant disability, so a study would need to be huge. As you can see from the graph above, requirement for surgery is somewhere between 0.5 and 1.3 per 1000 live births, so even s study investigating surgical rates would need to be very large.

One of the randomized trials, performed in Norway of a universal ultrasound screening program (Holen KJ, et al. Universal or selective screening of the neonatal hip using ultrasound? A prospective, randomised trial of 15,529 newborn infants. J Bone Joint Surg Br. 2002;84(6):886-90), found a reduction in the rate of late detected hip dysplasia with an RR of 0.2 (1 case out of 7,500 compared to 5 cases per 7,500) , which is a major reduction, but given the rarity of this outcome even such a large reduction may have been due to chance (95% CI 0.03-1.45).

A new publication from a center involved in a universal ultrasound screening program Biedermann R, et al. Results of universal ultrasound screening for developmental dysplasia of the hip. Bone Joint J. 2018;100-B(10):1399-404. reports the results of screening over 28,000 infants in their center. They report no cases of late diagnosis, an overall treatment rate (mostly Pavlik harness or a similar device) of 1% of babies, and 25 total (or 1 per 1000) who had surgery.

I agree with most of those points, but the evidence for some is weak, especially the first. Remeber that babies with any one of several congenital syndromes, and preterm infants are excluded from this discussion.

I think there is a case to be made for universal ultrasound screening, and the true impact on over-diagnosis and over-treatment is unclear, but very few cases are missed. On the other hand, screening all girls, all boys with a breech presentation, and all those with a first degree relative with a history of developmental dysplasia of the hip would dramatically decrease the number needing screening  with very little impact on the numbers detected.

I am a neonatologist and clinical researcher at Sainte Justine University Health Center in Montréal
View all posts by Keith Barrington →
This entry was posted in Neonatal Research and tagged Developmental dysplasia of the hip, Systematic Reviews. Bookmark the permalink.

3 Responses to Clunk/click every hip