Posted on 6 May 2016 by keithbarrington

Some very interesting recent publications about NEC, so I will post a multi-part bumper posting.

In this study the authors collected stool samples from all the VLBW infants in their NICU and froze them. They started doing this in St Louis, and then added cohorts from two other NICUs. When a baby developed NEC they analyzed all the stools up to the day of diagnosis (max 60 days), and then they found some matched controls (1 to 4 per case), with similar gestational age and birth date, they analyzed all their stools up to 30 days of age, and then every 3rd day to 60 days of age. What they call the “primary cohort” are the babies from St Louis, the “secondary cohort” was the babies from the other 2 centres, where stool collection started later.

In total they analyzed 2492 stool samples from 122 infants in the primary cohort, of whom 28 developed NEC; there were 94 controls.

The microbial community structure in case stools differed significantly from those in control stools. These differences emerged only after the first month of age. In mixed models, the time-by-necrotising-enterocolitis interaction was positively associated with Gammaproteobacteria (p=0·0010) and negatively associated with strictly anaerobic bacteria, especially Negativicutes (p=0·0019).

In the secondary cohort there were 44 infants, of whom 18 developed NEC. The results from the combined cohorts reflected what that quote above notes, with the additional finding that there was an decreased proportion of the combined Clostridia–Negativicutes class (p=0·0051) in the NEC babies compared with controls.

I am no microbiologist, so the term “Negativicutes” was new to me. It refers to a class of the Firmicutes that are Gram negative, (most Firmicutes are Gram positive, including clostridia and bacilli).

The Gammaproteobacteria include lots of the bad boys, Pseudomonads, and the Enterobacteria, which includes Salmonella, E Coli, Enterobacter, and Klebsiella.

This simplified figure in the article points out some of the complexity of the situation, if you compare the controls between centres you can see marked differences, for example in the proportion of the Gammas that are Klebsiellae, much higher in Louisville than elsewhere. I think this actually may account for some of the differences in NEC rates between centers, the microbiology of your NICU could have a major influence on NEC, much more than how you feed the babies!

In addition, the article confirms other observations that the intestinal microbiome of babies that go on to develop NEC is much less diverse than controls. 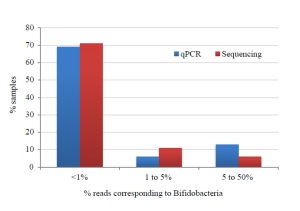 The authors, Warner et al. also used other techniques to examine Bifidobacteria specifically, and as this figure shows (which is from their on-line appendix), using 2 different methods (the red and the blue bars), there were very few Bifidobacteria in their babies, most having <1%. There was also no difference between cases and controls. They state the following:

Our data also provide a microbiological explanation for the recent failure of the probiotic Bifidobacterium breve BBG-001 to prevent necrotising enterocolitis in a large and rigorous multicentre randomised controlled trial in the UK. Specifically, we found no evidence that Bifidobacteria were under-represented in the stools of infants who subsequently developed necrotising enterocolitis.

Which is true as far as it goes, but there were vanishingly few bifidobacteria in either group. The reason for the negative results from the Pips trial do need to be figured out, it may be the wrong strain, or just randomly lower effect than the other trials, with whom the 95% confidence intervals overlap. On the other hand, the Newcastle group have recently published data showing very much higher bifidobacterial concentrations among infants who received routine probiotics compared to non-treated babies.

Which I will discuss in part 2.

I am a neonatologist and clinical researcher at Sainte Justine University Health Center in Montréal
View all posts by keithbarrington →
This entry was posted in Neonatal Research and tagged microbiome, Necrotising Enterocolitis. Bookmark the permalink.