Not neonatology: the antipodes week 5. Te Anau, Mount Luxmore, and the Otago peninsula

Posted on 25 January 2015 by keithbarrington

We moved on again last week, spent a few days at Te Anau, which is just east of fiordland, in the southern part of the south island. From here we were able to go on a trip to cruise on Doubtful Sound, a long beautiful fiord which we cruised right to the ocean (to encounter Fur Seals, dolphins and albatross) and back.

The next day  we decided to hike the first, steep, part of the Kepler track. New Zealand is a great place for walkers, there are a number of Trails and Tracks which are very well maintained and signposted, and pass through glorious scenery. Several multi-day walks are now famous, including the 4 day Milford Track, which is usually very wet, and not recommended for children, and the 4-day Kepler track. This is a loop track of about 60 km total, which has 3 huts along the trail for overnight stops. It is actually a track which was designed as such from scratch, compared to most which have gradually developed over the years from the walking trails of multiple earlier hikers. The first part of the track is quite steep, rising about 900 metres in the first 8 kilometres, up to the Luxmore hut. We decided to do this first part of the walk with the kids, after crossing the lake in a boat to miss out the first 8 km from the town to the start of the climb, planning to walk the whole track back to the town when we got back down the slope. 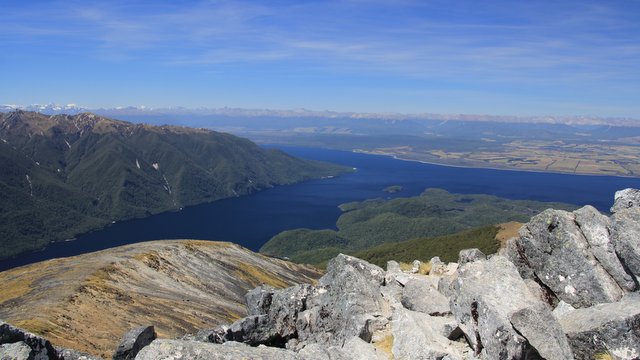 View from the summit of Mount Luxmore

After our lunch at the Luxmore hut we decided that it would be a shame to miss the last part of the climb to the actual summit of Mount Luxmore, so we decided to add the “little” extra to our hike. After a short, relatively, flat section the track started to climb again, with about another 300 meters up over a 5 km section of the track, ending with clambering over broken rocks to reach the summit at 1471 metres, having started the day at lake level, about 270 metres.  The views were glorious, and we were all feeling proud of ourselves, but it was maybe a mistake in the end, by the time we got back down the mountain and walked around the lake, we had covered over 31 kilometers in the day, which is the equivalent of completing the difficult half of the Kepler Track, in one day, with kids aged 7, 9 and 11 years old! The kids were exhausted, as you can see the picture at the end of the post on Violette’s blog, but they were all very proud of having climbed to the peak, and of covering such a long distance.

At the end of the week we moved on to Dunedin, to a house on the Otago peninsula.

Otago Bay, from our window

With this great view over the Otago bay. The peninsula has some interesting easy walks (to compensate for Mount Luxmore) with great widlife viewing opportunities, including the only mainland nesting site of an albatross. The Royal Northern Albatross nests on the tip of the peninsula for the last 80 0r or so years, and you can also see Little Blue Penguins, and New Zealand Sea Lions. Getting close to abatross was great, they are huge, although not the biggest of the albatross apparently.  Here is one in flight, close to a gull, which I think was a black backed gull, already a very large bird.

We hadn’t been sure about the part of our trip, visiting the Otago peninsula, but in the end the visits to Dunedin (the Museum and the Cadbury chocolate factory being hits with the children) and the walks, with and without wildlife encounters, were really worthwhile.

I have been experimenting a bit with HDR photographs, here are 2 that I think were succesful, both from the region. 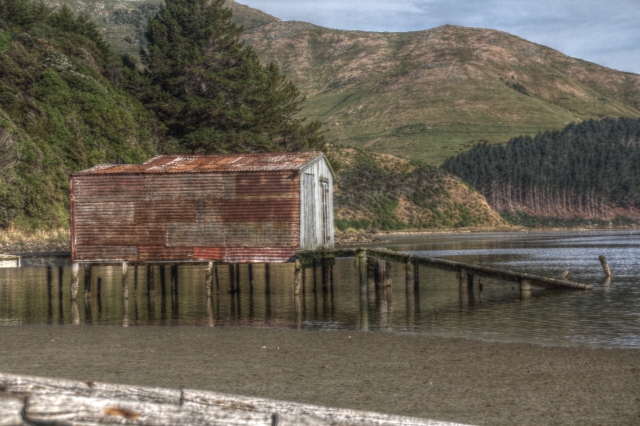 Hooper’s Inlet, on the Otago peninsula 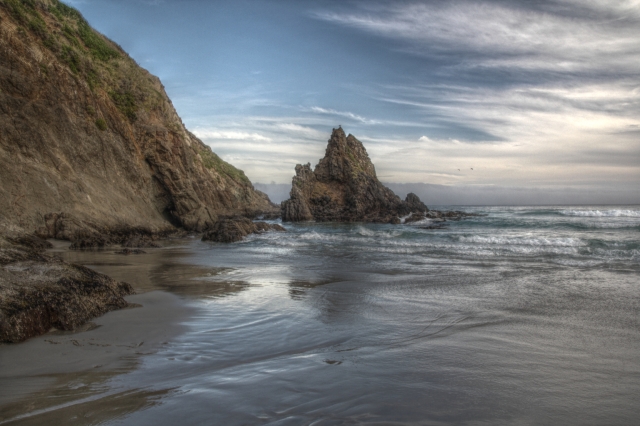