One Babe at a Time: ART and a multiplicity of multiples

Posted on 7 December 2012 by Keith Barrington

I have just written a review article which is in the submission revision process for a journal that shall remain nameless (I don’t know why, but that is the tradition, you don’t say which journal, until it gets accepted) It has been peer reviewed, and for the first time, I can truly say something that I often write in reviewer response letters, but which often isn’t really true, the reviewer really helped to improve the manuscript.

The subject is the pediatric implications of Assisted Reproductive Technologies. I reviewed many of the published articles about what ART does to babies and children. Mostly of course the children turn out fine, and many happy families have been created (or enlarged) by ART. On the other hand there are significant increases in several adverse outcomes: the main one being prematurity, which is largely because of twins, and triplets and more. Twins after ART are almost entirely due to the transfer of multiple embryos into the uterus after successful fertilization in the ‘test-tube’. There are a few twins even when a single embryo is transferred, as the embryo can split in two after transfer. (Single babies also have more complications after ART, but you will have to wait for the paper to have all the details, or do your own lit search.)

Annie Janvier and I started to get interested in this issue when we were in our previous positions, we experienced some very sad situations, with women who were already at very high risk of preterm delivery, for example, having 3 embryos transferred, becoming pregnant with twins and delivering twins at 24 weeks with multiple complications. There were many examples of complications that would have been avoided if a single embryo had been transferred. We wrote a paper in which we calculated the extra human, societal and financial costs of the irresponsible transfer of many embryos.

Since then in Quebec the government, after a consultation process in which Annie was heavily involved, decided to cover the costs of IVF for most women who wish to have the procedure, and accompanied the funding with a restriction on the numbers of embryos that can be transferred. Elective single embryo transfers immediately went from 6% to over 60%. There are some exceptions which allow 2 embryos to be transferred, based on maternal age and previous failed cycles, so we still had 30% with 2 embryos transferred, and a very small number with more than 2 (less than 1%). This has led to the most dramatic and fastest drop in multiple deliveries from ART anywhere. There was an instantaneous drop from 30% of IVF pregnancies being multiples, to 5% for the 1st 6 months of the program. This was accompanied by a modest increase in the total number of cycles. Further regulations changes are likely to completely ban more than 2 embryo transfers. Similar things have happened in the past in Sweden and in Belgium, but it took a little longer for them to achieve their goals. Until recently one of the countries with the highest proportion of multiple embryo transfers and multiple deliveries was Turkey, they had the highest number of triplet deliveries anywhere in the world 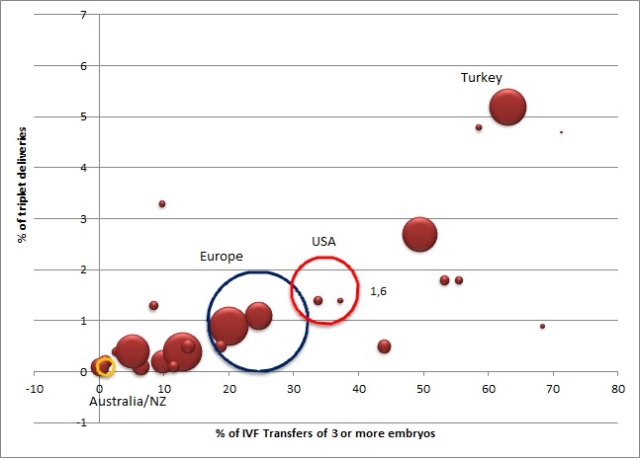 This is a bubble plot showing the percentage of IVF transfers that were 3 or more embryos against the proportion of the pregnancies that result that are triplets. The area of each bubble is proportional to the number of transfers performed (Europe for example had 312,000 procedures and Australia/NZ had 11000). The solid bubbles are the individual countries of Europe, and the open circles are Europe, USA and Australia New Zealand. The data are from the latest publications of various registries: the European is from procedures done in 2008, the USA is from 2009, and the Australian 2010. You can see that the Australian and New Zealand data show almost no 3 embryo transfers and very few triplets (they also have only 8% twins). In 2008 Turkey had a lot of both, in contrast Sweden there were no transfers of more than 2 embryos, but they had one set of triplets, they are the extreme lower left filled circle.

I have a similar graph for twins, but that is part of the manuscript being considered right now by XXXXXX, oops, almost gave the journal name away!

In Turkey they were very worried about this, so in 2010 they passed legislation to limit embryos, using rules which are similar to the Belgium and Quebec rules. (Guzoglu N, Kanmaz HG, Dilli D, Uras N, Erdeve O, Dilmen U: The impact of the new turkish regulation, imposing single embryo transfer after assisted reproduction technology, on neonatal intensive care unit utilization: A single center experience. Human Reproduction 2012, 27(8):2384-2388) they have already seen a big improvement, with many fewer multiples.

One of the problems has been that pediatricians and neonatologists, who look after the end result of ART, have not been active in the debates about whether and how to control and limit the practices in many countries. When we get involved, as Annie Janvier and the Society of Neonatologists did in Quebec, we can have an impact.

In terms of total numbers of babies affected, the USA has the biggest problem at present. They have very very few single embryo transfers, 30% of the pregnancies are twins or more; of about 100000 procedures there were 38000 deliveries of which 1.6% were triplets, that is 1800 babies unnecessarily put at very high risk. The twins numerically are much more frequent, 22,800 twins born, of whom more than half will be preterm, many being extremely preterm. The current lack of regulation in the USA is putting many babies lives and futures at risk, as in several other countries.

Some of the regulations regarding IVF and embryo transfers are completely senseless. In Italy all embryos have to be transferred by law. Embryo freezing or disposal is not permitted, but at least there is a limit of 3 embryos that are allowed to be created. What this means is that the large bubble just below and to the left of Turkey is Italy, nearly 50% of the transfers are 3 embryos, and they have a triplet frequency of 2.7%. This legislation, which is supposed to protect the ‘rights’ of the embryos, actually puts them at risk, increasing the numbers of twins and triplets, and increasing complications and perinatal mortality.

We need to stop being passive in this debate. It is our patients that are suffering from what is an largely avoidable epidemic of multiple births.

I am a neonatologist and clinical researcher at Sainte Justine University Health Center in Montréal
View all posts by Keith Barrington →
This entry was posted in Neonatal Research and tagged Ethics, Preventing Prematurity, twins. Bookmark the permalink.

1 Response to One Babe at a Time: ART and a multiplicity of multiples